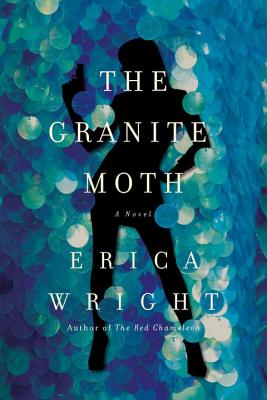 “This new PI has got a smart mouth on her, and plenty of wigs to help her find her own true character.”—The New York Times Book Review (on The Red Chameleon)

It begins with a bang: Kathleen Stone is watching her friend Dolly and his fellow drag queens from The Pink Parrot perform at the Halloween Parade when their float explodes. Suspecting foul play, The Pink Parrot’s owner, Big Mamma, hires Kat to find the culprit.Meanwhile, Kat has not given up on her quest to bring gangster Salvatore Magrelli to justice and once more dons a disguise to infiltrate The Skyview, an exclusive club run by his wife, Eva. When she watches the club’s poker dealer drop dead during a high-stakes game, she decides to look into his death as well. Upon discovering that he was also gay, she suspects that this murder could be a hate crime connected to the parade explosion.However, as Kat digs deeper, she realizes that the truth is much more complicated and the real villains are much more difficult to spot.

Praise For The Granite Moth…

More
concentrated than Kathleen's debut, Wright's second entry begins to develop a
detective who can shine through all those costume changes.

Brisk, dark, slinky. The Granite Moth confirms that Wright, an editor at the prestigious literary magazine Guernica, has a very promising second career on her hands.

Much of the fun in this layered thriller comes from Wright’s sardonic humor, which is fresh and young and smart, and her prose style, which is not the sort of hackneyed fare that largely populates the thriller genre.

Struts into hard-boiled territory with a private detective who's skilled in disguises and has more wigs than Beyoncé (well maybe not quite), a BF, Dolly, who's a talented drag queen (he has more wigs than Bey), and she has a relationship with the NYPD that's fraught with tension the result of being thrown into undercover assignments right out of the academy. A lively read.

Erica Wright is a senior editor at Guernica magazine. She is also the author of the poetry collection Instructions for Killing the Jackal (Black Lawrence Press, 2011), and her work has appeared or is forthcoming in BOMB,New Orleans Review, and Paste, among other publications. She attended NYU, where she won the Thomas Wolfe Prize, and received her MFA in Poetry from Columbia. She has taught creative writing at Marymount Manhattan College, Columbia, 92YTribeca, and NYU. Her time as an instructor at John Jay College of Criminal Justice sparked her interest in crime writing.
Loading...
or
Not Currently Available for Direct Purchase