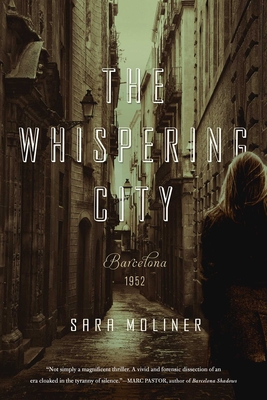 Barcelona in 1952 is rife with rumor and violence, and every secret can be lethal, in this intricate, atmospheric, and utterly gripping new thriller

General Franco's fascist government is at the height of its oppressive powers, casting a black shadow across the city. When wealthy socialite Mariona Sobrerroca is found dead in her mansion in the exclusive Tibidabo district, the police scramble to seize control of the investigation.

But Ana soon realizes that a bundle of strange letters unearthed at the scene point to a sequence of events dramatically different from the official version. She enlists the help of her cousin Beatriz, a scholar, and what begins as an intriguing puzzle opens up a series of revelations that implicate the regime's most influential figures. The two women have placed themselves in mortal danger. As the conspiracy unfolds, Ana's courage and Beatriz's wits will be their only weapons against the city's corrupt and murderous elite.

Sara Moliner is the pseudonym for the writing duo Rosa Ribas and Sabine Hofmann. Rosa Ribas was born in Barcelona and now teaches at Frankfurt University. She is the celebrated author of six previous novels published in Spain. Sabine Hofmann is a former lecturer in philology at Frankfurt University. The Whispering City is their first novel together.

Praise For The Whispering City: A Novel…

The
tension in this gritty debut lies in the detailed descriptions of Barcelonans
in the grip of state control, which gains a more brutal edge played against the
cozy-like presentation of the mystery. A fascinating angle on an
ever-intriguing period that combines the characterization of Laurie R. King’s
Mary Russell series with the breathless tension of Tom Rob Smith’s tales of the
Stalinist Soviet Union.

Spain's
Fascist regime gives the novel a ready-made atmosphere of fear and suspicion.
But the real measure of that time is in the details rendered with the
familiarity of something closely observed. If this first mystery is, as many
are, the introduction of a detective for a new series, then this young reporter
may prove to be a character readers are eager to follow.

The Whispering City depicts a time and place so perfectly that the central mystery almost seems beside the point. A historical gem.


A powerful voice that thunders with cultural wit and historical fact. The historical-political plot sears with sensational revelations.

One of the most original, dynamic, convincing and addictive crime novels around today.

An exceptional debut mystery. Moliner is a pseudonym for a Spanish and German female writing duo. Their attention to details that display character coupled with the crushing historical setting make this one of the most distinctive and atmospheric mysteries I’ve read this year.

This is an exciting, original and thoughtful thriller that paints a vivid picture of the awfulness of life in Barcelona, and indeed the whole of Spain, during the fascist years.

The Whispering City is not simply a magnificent thriller: it is a vivid and forensic dissection of an era cloaked in a tyranny of silence.