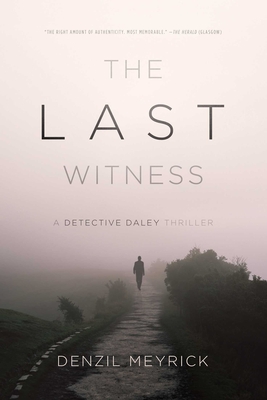 James Machie was a man with a genius for violence, his criminal empire spreading beyond Glasgow into the UK and mainland Europe. Fortunately, James Machie is dead, assassinated in the back of a prison ambulance following his trial and conviction.But now, five years later, he is apparently back from the grave, set on avenging himself on those who brought him down. Top of his list is his previous associate, Frank MacDougall, who unbeknownst to D.C.I. Jim Daley, is living under protection on his lochside patch, the small Scottish town of Kinloch. Daley knows that, having been the key to Machie’s conviction, his old friend and colleague D.S. Scott is almost as big a target. And nothing, not even death, has ever stood in James Machie’s way .

Praise For The Last Witness…

Meyrick’s prose and plot are sure-footed. He's a welcome addition to the growing list of Scottish crime writers, and if The Last Witness is any indication, his works are guaranteed to be included on many ‘must-read’ lists in the future.


Scottish
author Meyrick makes his U.S. debut with this promising first in a crime
series. A compelling lead and a satisfyingly twisted plot make this a welcome
addition to Tartan noir.

Has the ability to give even the least important person in the plot character and the skill to tell a good tale.

The core plot, the action, the police procedures all strike a strong and believable note.

Soon to be mentioned in the same breath as authors such as Alex Gray, Denise Mina and Stuart Macbride. Very impressive.
— Ian Baille

The
striking characters and shifting plot vibrate with energy. The bodies pile up,
the tension builds, the blood flows, and the weather threatens—quite like a
graphic novel.

The US debut of Meyrick promises the start of a compelling new Scottish crime series. Fans of Tartan Noir will welcome this new voice in Scottish crime fiction.

The right amount of authenticity. Gritty writing. Most memorable.

Fans
of international crime will slog through much Scottish dialect to learn how
Machie cheated death, and most will find it well worth the effort.

Denzil Meyrick was educated in Argyll, then after studying politics, joined the Strathclyde Police, serving in Glasgow. After being injured and developing back problems, he now works as a freelance journalist in both print and on radio. Denzil lives in Scotland.
Loading...
or
Not Currently Available for Direct Purchase