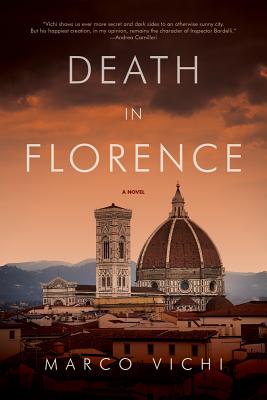 Florence, October 1966. When a young boy vanishes, the police fear the worst, which brings Inspector Bordelli into an increasingly desperate investigation, in the new mystery from critics' favorite Marco Vichi.

Florence, 1966. The rain is never-ending. When a young boy vanishes on his way home from school the police fear the worst, and Inspector Bordelli begins an increasingly desperate investigation.

Then the flood hits. During the night of November 4th the swollen River Arno, already lapping the arches of the Ponte Vecchio, breaks its banks and overwhelms the city. Streets become rushing torrents, the force of the water sweeping away cars and trees, doors, shutters and anything else in its wake.

In the aftermath of this unimaginable tragedy the mystery of the child's disappearance seems destined to go unsolved. But obstinate as ever, Bordelli is not prepared to give up.

Marco Vichi's novel Death in Florence won the Scerbanenco, Rieti, and Camaiore prizes. His novels Death in August and Death and the Olive Grove are available from Pegasus Crime.

Praise For Death in Florence: A Novel (Inspector Bordelli Mysteries)…

Bordelli is a marvelous creation. He’s a WWII vet
with still-vivid memories of its horrors, a dedicated policeman who is close
friends with a former prostitute and a thief, a man who administers his own
punishment to a shopkeeper gouging flood victims, a hopeless romantic who falls
in love easily and totally with a beautiful young salesgirl, and a man who
takes a dangerous gamble to try to nail Giacomo’s killers.

Inspector Bordelli has a lot on his mind. He wonders why
he’s never found a great woman, he’s got to cut back on
cigarettes, and he should probably figure out who killed
that wealthy older lady in her 17th-century villa.

For those who have wandered the streets of Florence or who want to inhabit another person’s head for a while and to delve into the musings of a dogged detective, this is a rewarding read. Indeed, as I approached the end, I couldn’t put it down.

As
delicious and satisfying as the Tuscan cuisine that Bordelli savors every
chance that he gets.

Vichi shows us ever more secret and dark sides to an
otherwise sunny city. But his happiest creation, in my
opinion, remains the character of Inspector Bordelli.
— Andrea Camilleri