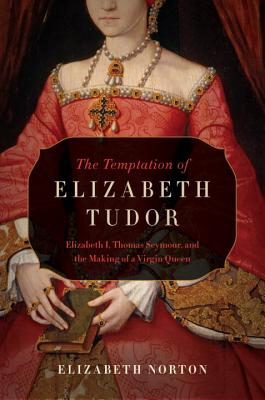 The Temptation of Elizabeth Tudor (Hardcover)

Elizabeth I, Thomas Seymour, and the Making of a Virgin Queen

A power-hungry and charming courtier. An impressionable and trusting princess. The Tudor court in the wake of Henry VIII’s death had never been more perilous for the young Elizabeth, where rumors had the power to determine her fate

England, late 1547. King Henry VIII Is dead. His fourteen-year-old daughter Elizabeth is living with the king’s widow, Catherine Parr, and her new husband, Thomas Seymour. Seymour is the brother of Henry VIII’s third wife, the late Jane Seymour, who was the mother to the now-ailing boy King.

Ambitious and dangerous, Seymour begins and overt flirtation with Elizabeth that ends with Catherine sending her away. When Catherine dies a year later and Seymour is arrested for treason soon after, a scandal explodes. Alone and in dreadful danger, Elizabeth is threatened by supporters of her half-sister, Mary, who wishes to see England return to Catholicism. She is also closely questioned by the king’s regency council due to her place in the line of succession. Was she still a virgin? Was there a child? Had she promised to marry Seymour?

Under pressure, Elizabeth shows the shrewdness and spirit she would later be famous for. She survives the scandal, but Thomas Seymour is not so lucky. The “Seymour Scandal” led Elizabeth and her advisers to create of the persona of the Virgin Queen.

On hearing of Seymour’s beheading, Elizabeth observed, “This day died a man of much wit, and very little judgment.” His fate remained with her. She would never allow her heart to rule her head again.

Elizabeth Norton is a historian specializing in the queens of England and the Tudor period. She is the author of The Temptation of Elizabeth Tudor and lives in England.

Praise For The Temptation of Elizabeth Tudor: Elizabeth I, Thomas Seymour, and the Making of a Virgin Queen…

A very detailed investigation of the young Elizabeth and her infatuation with Thomas Seymour. A fascinating book. Norton has a fluid, delightful style. A strong history and well-told story.

Norton explains these machinations with as much knowledge and nuance as any historian has done since A. F. Pollard. Her book is indeed dramatic and shrewd in its analysis of the marriage-politics swirling around the court. Norton's book could scarcely be bettered.

A scheming fortune hunter, Seymour's judgment was anything but sound. Great material.

A stunning achievement. I was spellbound by this beautifully produced book. This is how historical writing should be: well-paced, engaging, packed with fascinating detail and soundly researched. Elizabeth Norton writes a captivating narrative, drawing the reader into the world of the Tudors, evoking it so compellingly, and arguing her conclusions convincingly. I can't praise it highly enough. It's stunning

Cuts an admirably clear path through tangled Tudor intrigues.
— Jenny Uglow, author of IN THESE TIMES

In
another of her well-researched and intriguing Tudor period titles, historian
Norton thoroughly conveys the environment that bred Queen Elizabeth I, the
Virgin Queen, and brought her to the attention of the ambitious (and married)
Thomas Seymour. Highly recommended for readers interested in British history
and the Tudor dynasty. Fans of historical fiction such as Philippa Gregory’s
‘Tudor Court’ series will also find themselves invested in the real-life
scandal that befell one of England’s most famous queens.

The
story of Thomas’ comeuppance and Elizabeth’s reaction makes for a quick,
enjoyable read.