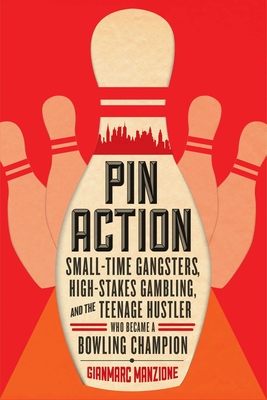 Small-Time Gangsters, High-Stakes Gambling, and the Teenage Hustler Who Became a Bowling Champion

"The Color of Money" meets "The Big Lebowski." Pin Action is an inspiring and improbable story of transcendence, redemption, survival and one of the greatest, forgotten sports legends in New York City sports history.

Most of us think of bowling as a "sport" in quotation marks, and bowling alleys are places with disco balls, matching shirts, and funny shoes. But in the 1960s, New York City was the center of "action bowling", a form of high-stakes gambling in which bowlers—often teenagers—faced off for thousands of dollars every night. When money like that is changing hands, you can bet the pressure is on (and the balls are rigged), and losses come with dire consequences. But for a few kids, the world of action bowling would turn out to be a ticket off the mean streets and onto the Professional Bowlers Association Tour. For Ernie Schlegel, it would be a chance to shed his hustler ways and become a bonafide champion.

For the more than 100 million bowlers worldwide and for fans of timeless sports histories, Pin Action captures the underbelly of 1960s and '70s New York and tells the true story of how the most notorious action bowler of all time became a Hall of Famer. Set in the gritty, flashy, lost world of action bowling, Gianmarc Manzione tells an epic tale filled with seedy characters, uproarious eccentricities, improbable twists of fate, and a rags-to-riches narrative so crazy it has to be true.

Gianmarc Manzione is the most recognized writer in the bowling industry today. He has written on the subject for the New York Times and all of the bowling industry’s highest-profile publications.  Manzione fell in love with bowling as a kid growing up in Brooklyn, where he spent so much of his childhood in local bowling alleys that he was virtually raised in them.  Manzione currently teaches English and creative writing at the College of Central Florida, and lives with his wife near Tampa.

A thoroughly entertaining slice of twisted Americana, New York gangster style. Only in the Big Apple could something so pure and Middle America as bowling become so infused with most of the seven deadly sins. Put it on the shelf with The Big Lebowski and Jersey Boys.

— Dary Matera, author of QUITING THE MOB and THE F.B.I.'s TEN MOST WANTED

A book about bowling? Zzzzzz, right? Nope. Manzione lays bare a world to which most readers will have had little exposure. But he brings that world alive with vivid prose and razor-sharp characterizations. A superb sports memoir.

A hard-boiled and often funny look at the hustlers, thugs and characters of the 1960s New York bowling underworld. Who knew bowling alleys could tell such entertaining stories?

This well-researched account is for those who remember the glory days of bowling. Others will be fascinated by the gritty side of the sport, which few knew existed.
or
Not Currently Available for Direct Purchase
Copyright © 2020 American Booksellers Association