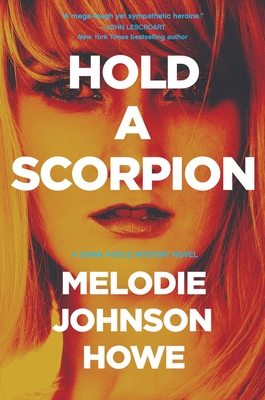 The new Diana Poole crime thriller takes our amateur sleuth deep into Southern California's underworld to uncover the mystery of a diamond-encrusted scorpion—and the reason for the murders that follow in its wake.

Diana Poole’s last movie was a flop, but she earned enough money to fix up her Malibu house. One afternoon standing outside it, she sees a woman across the highway waving at her. Diana doesn’t recognize her. Still waving, the woman walks into the oncoming cars and is killed instantly. Why would anyone do that?

The next night, while still horrified by the accident, Diana is held at gunpoint by a man demanding the dead woman’s scorpion. What kind of scorpion? A live one? A brooch? A pendant? Diana searches the accident scene and finds a diamond-encrusted object in the shape of a scorpion. Breathless, she remembers her movie star mother showing it to her the last time she saw her alive.

Did the woman who was waving at her want her to see it? Was the woman’s death really an accident? Why did the gunman want the scorpion? Did her mother really die of natural causes? Could it have been murder?

With the diamond-encrusted object as her only clue, Diana goes on a heart-pounding journey determined to find answers. But asking a lot of questions can upset people. Especially the unpredictable killer who is stalking her.

Praise For Hold a Scorpion: A Diana Poole Thriller…

"Sharp and smartly edgy, with an insider’s peek into Hollywood and a Ross Macdonald sensibility. Once started, I found this book hard to put down."
— Ellery Queen Mystery Magazine

"Splendid. I adore Diana and this series with its southern California settings and its Hollywood insider vibe. Johnson Howe has a keen eye for the quirky in her characters without losing focus on their broader humanity. Her novels have always reminded me of the domestic crime stories of another southern California writer I admire, Ross Macdonald."
— Milwaukee Journal Sentinel

"Diana Poole’s cool-headedness at making excellent deductions, based on observed behaviors and an actor’s bag of tricks, is enjoyable."
— Bookgasm

"The latest in a line of perfectly crafted thrillers featuring Diana Poole as an actress turned amateur sleuth."
— New York Journal of Books

Melodie Johnson-Howe is the author of three novels, The Mother Shadow, nominated for an Edgar award; Beauty Dies; and City of Mirrors. After a career in movies and television, she quit acting to write novels. She lives in Santa Barbara with her husband.
Loading...
or
Not Currently Available for Direct Purchase