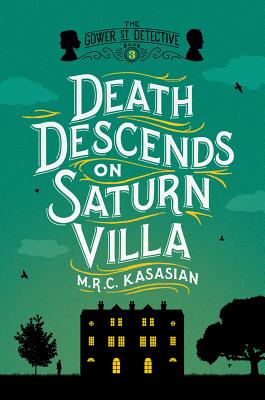 The new mystery novel in the evocative Victorian crime series starring the charming March Middleton and the most curmudgeonly private detective in London, Sidney Grice.

March Middleton is the niece of London's greatest (and most curmudgeonly) private detective, Sidney Grice. March has just discovered a wealthy long-lost relative she never knew she had. When this newest family member meets with a horrible death, March is in the frame for murder—and only Sidney Grice can prove her innocence.

Grice agrees to investigate (for his usual fee) but warns that he is not entirely convinced of her innocence. If he were in her position, he might have been tempted. But the more he uncovers, the more all the clues point to Grice himself . . .

"Not just another Sherlock Holmes pastiche, this series has its own allure that will attract fans of Will Thomas, Alex Grecian, and David Morrell."
— Library Journal

"Another excellent installment in the Gower Street Detective mystery series! A more intricate mystery than the first two in the series. The writing is just as flawless, though, packed full of delicious dialogue, voice-fueled narration, and many laugh-out-loud moments. My adoration of Sidney and March remains unshaken. Heartily enjoyed!"
— Historical Novels Society

"The series has achieved a significant following due in some part to the author’s brisk and fluid style, sharp, short chapters adequately paced, and due in greater part to the humorously arrogant antics of the detective at the center of the series, one Sidney Grice. If you’re a fan, you’ll love the dynamism in this one."
— Bookgasm

M. R. C. Kasasian is the author of The Mangle Street Murders,The Curse of the House of Foskett, Death Descends on Saturn Villa, and The Secrets of Gaslight Lane, all available from Pegasus Crime. He divides his time between Suffolk and Malta.
or
Not Currently Available for Direct Purchase