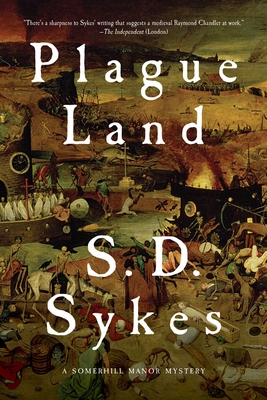 Oswald de Lacy was never meant to be the Lord of Somerhill Manor. Despatched to a monastery at the age of seven, sent back at seventeen when his father and two older brothers are killed by the Plague, Oswald has no experience of running an estate. He finds the years of pestilence and neglect have changed the old place dramatically, not to mention the attitude of the surviving peasants.

Yet some things never change. Oswald's mother remains the powerful matriarch of the family, and his sister Clemence simmers in the background, dangerous and unmarried.

Before he can do anything, Oswald is confronted by the shocking death of a young woman, Alison Starvecrow. The ambitious village priest claims that Alison was killed by a band of demonic dog-headed men. Oswald is certain this is nonsense, but proving it—by finding the real murderer—is quite a different matter. Every step he takes seems to lead Oswald deeper into a dark maze of political intrigue, family secrets and violent strife.

And then the body of another girl is found.

Sarah Sykes brilliantly evokes the landscape and people of medieval Kent in this thrillingly suspenseful debut.

It’s no fun reading a medieval mystery if it isn’t steeped in filth, squalor and pestilence. S. D. Sykes gets right to the point in Plague Land, which serves it all up in vivid detail, from the noxious smells to an actual burial pit, heaped with the putrefying bodies of plague victims.

With political intrigue and the social barriers of the Middle Ages in play, Sykes adds an intricate and intriguing debut to the ever-widening pool of medieval-era mysteries. Thrilling plot twists and layered characters abound in this rich tale of murder and mystery in 14th-century Kent.

Everything a reader would want in a historical
mystery: a gripping plot, vivid language, living and breathing characters, and
an immersive depiction of the past. From the opening line, Sykes grabs the
reader by the throat.

Dark and disturbing, but is written so well that we are carried forward, eager to solve the enigmas. I do have to emphasize the skilful creating of medieval country life that folds us in dark evil-smelling, shadowy England. I truly lost all sense of time while reading it.

Plague Land is a fascinating historical crime novel about a world turned upside down, inhabited by a rich cast of characters. A terrific debut and a wonderful start to a brand-new series.

— Antonia Hodgson, author of The Devil in The Marshalsea

Plague Land is a gripping historical crime thriller, an engaging coming-of-age story and a richly textured evocation of 14th Century Kent. I was totally hooked.

There are plot twists aplenty. Plague Land is a quest to rebuild identity in an apocalyptic world, a theme that makes this new medieval series one I will be sure to follow.

— Martine Bailey, author of An Appetite for Violets

A compelling murder mystery with a stark yet poetic style [and] a vivid sense of place.
— Rebecca Mascull, author of Song of the Sea Maid

S. D. Sykes received an MA in Writing from Sheffield Hallam in England. She attended the novel writing course at Curtis Brown, where she was inspired to write Plague Land. She lives in England.
Loading...
or
Not Currently Available for Direct Purchase