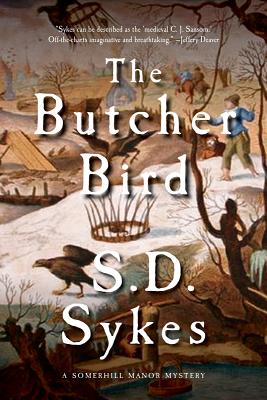 In the sequel to the critically acclaimed Plague Land, we return to Somershill Manor, where an ominous legend takes hold of hearts and minds as children begin to disappear.

Oswald de Lacy is growing up fast in his new position as Lord of Somershill Manor. However, there is still the same amount of work to be done in the farms and fields, and the few people left to do it think they should be paid more—something the King himself has forbidden.

Just as anger begins to spread, the story of the Butcher Bird takes flight. People claim to have witnessed a huge creature in the skies. A new-born baby is found impaled on a thorn bush. And then more children disappear. Convinced the bird is just a superstitious rumor, Oswald must discover what is really happening. He can expect no help from his snobbish mother and his scheming sister Clemence, who is determined to protect her own child, but happy to neglect her step-daughters.

From the plague-ruined villages of Kent to the thief-infested streets of London and the luxurious bedchamber of a bewitching lady, Oswald's journey is full of danger, dark intrigue, and shocking revelations.

Sykes offers an unusual perspective on this historical period. She also deals realistically with the troubles of the era’s women.

Ms. Sykes does a skillful job of making her forward-thinking but all-too-human protagonist both believable and likeable, and in bringing to life an epoch when “science” was often as dangerous as superstition.

The second in Sykes’ fine series is a puzzling mystery with a surprise at the end, filled with historical detail and, in Oswald, a slowly growing force to be reckoned with.

From his small village in Kent to the seamy underbelly of London, Oswald’s mission to rid his land of the Butcher Bird is enthralling, chilling, and vastly entertaining.

British author Sykes establishes herself firmly as a major talent with this hard-edged sequel to 2015’s Plague Land. Sykes artfully integrates both puzzles with the politics of the time.

S. D. Sykes received an MA in Writing from Sheffield Hallam in England and is the author of Plague Land, The Butcher Bird, and City of Masks, all available from Pegasus Crime. She lives in England.
Loading...
or
Not Currently Available for Direct Purchase