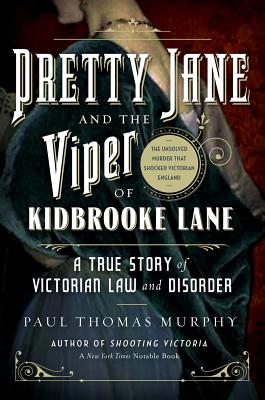 Pretty Jane and the Viper of Kidbrooke Lane

A True Story of Victorian Law and Disorder: The Unsolved Murder that Shocked Victorian England

A vivid investigation into the unsolved murder case that shocked Victorian England, by the author of the New York Times Notable Book Shooting Victoria.

On April 26th, 1871, a police constable walking one of London’s remotest beats stumbled upon a brutalized young woman kneeling in the muddy road, her face smashed and battered. The policeman gaped in horror as the woman stretched out her hand to him, collapsed in the mud, muttered “let me die,” and slipped into a coma. Five days later, she died, her identity still unknown.

Within hours of her discovery, scores of Metropolitan Police officers were involved in the investigation, while Scotland Yard sent one of its top detectives to lead it. On the day of her death, the police discovered the girl's identity: Jane Maria Clouson, a sixteen-year-old servant to the Pooks, a respectable Greenwich family. Hours later, they arrested her master's son, twenty-year-old Edmund, for her murder.

An epic tale of law and disorder, Pretty Jane and the Viper of Kidbrooke Lane is the story of a criminal case conducted at the time of the birth of modern forensic science. It is the story of the majesty–and the travesty–of the nineteenth-century British legal system: the zealous prosecutors determined to convict young Pook; and the remarkable lawyer equally determined to obtain his acquittal by any means possible. At the heart of this story are the alleged killer and his alleged victim: Edmund Pook, the young Victorian gentleman caught up in a legal nightmare, and Jane Maria Clouson, the young maid whose hard life before her tragic death serves as a bracing corrective to Downton Abbey fantasies about the lives of British servants.

Using an abundant collection of primary sources, Paul Thomas Murphy creates a gripping narrative of the police procedural and the ensuing legal drama, with its many twists and turns, from the discovery of the body until the final judgement–and beyond. For while the murder of Jane Clouson has for nearly one hundred and fifty years remained unsolved, much of the evidence remains, and Murphy, applying contemporary forensic methods to this Victorian cold case, reveals definitively the identity of Jane Clouson's murderer–and provides the resolution that Jane's angry supporters long ago demanded.


Praise For Pretty Jane and the Viper of Kidbrooke Lane: A True Story of Victorian Law and Disorder: The Unsolved Murder that Shocked Victorian England…

I would like to have been taught by Paul Thomas
Murphy. He’s the most free-spirited of scholars.
— John Sutherland

An impressive, exceptional, original, and deftly crafted read from beginning to end, Pretty Jane and the Viper of Kidbrooke Lane clearly demonstrates author Paul Thomas Murphy as painstaking researcher who can draw from a diversity of primary sources to produce a gripping and compelling narrative. While Pretty Jane and the Viper of Kidbrooke Lane is very highly recommended for both community and academic library collections, it should be noted for personal reading lists of academia and non-specialist general readers with an interest in Victorian England's darker history that this outstanding work is also available in Kindle, as well as in a complete and unabridged Audio Book CD format.

Murphy displays a novelist’s gifts in this fascinating true crime account. Murphy captures the drama of the flawed investigation, and the legal proceedings that followed. His solution to the crime—based on current forensic science—is likely to be the last word on the case.

This fascinating account of a Victorian murder, complemented by the added strength of a rich description of the period’s society and judicial system, should be a solid addition to academic and true crime collections.

Entertaining. This highly readable story still shows the cleverness of the police and the frustrations of prosecutors.

Although Murphy is mainly interested in the advances of forensic science, his lively narrative, with its unambiguous tone of outrage, is also a takedown of the social system.

Paul Thomas Murphy is the author of Shooting Victoria, a New York Times notable book. He holds advanced degrees in Victorian Studies from Oxford and McGill Universities and the University of Colorado, where he taught both English and writing on interdisciplinary topics. He currently resides in Boulder, Colorado.
Loading...
or
Not Currently Available for Direct Purchase