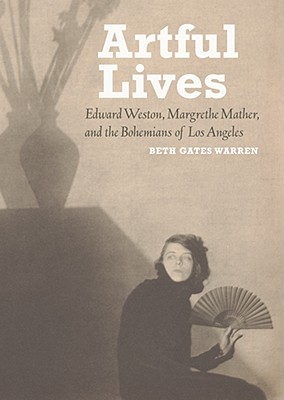 Edward Weston, Margrethe Mather, and the Bohemians of Los Angeles

This captivating biography reveals the previously untold love story of Edward Weston and Margrethe Mather. Both were photographic artists at the center of the bohemian cultural scene in Los Angeles during the 1910s and 1920s, yet Weston would become a major Modernist photographer while Mather, who Weston ultimately expunged from his journals, would fall into obscurity. The book reveals how they and their entourage sought out the limelight as the Hollywood film industry came of age.

Based on ten years of research and illustrated with extraordinary images, some never published, this history has a captivating range of characters, including Charlie Chaplin, Imogen Cunningham, Max Eastman, Emma Goldman, Tina Modotti, Vaslav Nijinsky, and Carl Sandburg. The lively text brings to life the ambiance of this exciting time in Los Angeles history as well as its darker side. Artful Lives exceeds any previously published account of this key period in Weston’s development and reveals Mather’s important contribution to it, making it an essential reference in Weston studies.

“A rehabilitation of an unjustly forgotten photographer, this absorbing read will appeal to students of art and California.”—Library Journal

“An illuminating insight into both the creative process and into the lives of a group of people influential in creating the cultural world in which we still live today.”—Photographica World

“In Artful Lives, Beth Gates Warren recaptures the milieu that formed both [Edward Weston and Margarethe Mather], and restores Margarethe Mather’s unique accomplishment to the position it deserves.”—Times Literary Supplement

“Beth Gates Warren succeeds in bringing [Mather] out of obscurity and making a persuasive case for her photographic talent.”—Los Angeles Review of Books

“Author Beth Gates Warren, a former director of Sotheby’s photo department, has written her exhaustively researched book with the page-turning pace of a novel. Her prose has as much love for its young, sexy and messy principals as it does for the city in which they lived.”—PureWow

Beth Gates Warren is an independent scholar and consultant in the field of fine art photography and the author of Margrethe Mather and Edward Weston: A Passionate Collaboration (W. W. Norton, 2001), which accompanied an exhibition she curated for the Santa Barbara Museum of Art.