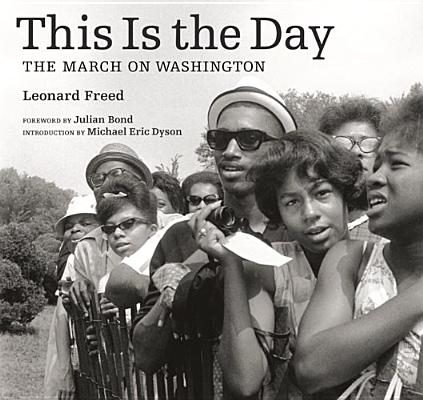 This Is the Day

The March on Washington

This Is the Day: The March on Washington is a stirring photo-essay by photographer Leonard Freed documenting the March on Washington for Jobs and Freedom of August 28, 1963, the historic day on which Dr. Martin Luther King Jr. delivered his “I Have a Dream” speech at the base of the Lincoln Memorial. This book commemorates the fiftieth anniversary of the historic march that ultimately led to the passage of the Civil Rights Act of 1964.
Never before published in book form, the seventy-five photographs in this volume were chosen from among the hundreds of images that Freed made in the nation’s capitol—before, during, and after the march. These images not only present us with stunning wide-angle views of hundreds of thousands of marchers overflowing the National Mall but also focus on small groups of people straining to see the speakers and on individual faces, each one filled with hope and yearning, epitomized by the beautiful young woman who throws her entire being into singing "We Shall Overcome.” In addition are eighteen pictures from the twentieth-anniversary march of August 1983, conveying a sense of celebration coupled with peaceful protest.
Accompanying the photographs are a first-hand, backstage account of the preparations leading up to the march by social activist and civil rights leader Julian Bond; an essay on the importance of the march and Dr. King's involvement by sociology professor and author Michael Eric Dyson; and an informative discussion of Freed’s approach to the photographic project by scholar Paul Farber.

Praise For This Is the Day: The March on Washington…

“Leonard Freed’s photographs provide one of the best records of the geographic, racial and generational diversity of the marchers and the groups they represented. . . . These photographs unveil the intimate human connections that together produced one of the nation’s most consequential events.”—New York Times

“Riveting. . . . Leonard Freed focused on the details: People arriving by buses and vans to join in the protest. Shots of the many volunteers preparing placards for distribution show the marchers’ determination. But then he pulls back to get some of the most stunning images in the book: wide-angle shots of an overflowing crowd yearning for freedom.”—Chicago Tribune

“A visual document showcasing the diversity of marchers who gathered that day.”—CNN

“Leonard Freed’s work exposed the racial inequalities and tensions that plagued a growing nation. He captured the emotions of a group of people whose past were filled with struggles and futures were populated with great hope.”—ABC News

“This Is the Day is an important lens through which to relive one of the peak moments of the civil rights movement.”—Washington Post

“Leonard Freed’s statement that ‘photography is an emotional thing, a graceful thing’ is most evident on these pages, where determined individuals of all colors, who were willing to literally stand up for equal rights for all, are aptly represented.”—Choice

Leonard Freed (American, 1929–2006) was a pioneer in the genre of socially conscious photojournalism. Freed’s photographs are represented in many public and private collections. His book Black in White America, first published in 1967/68, was reissued by Getty Publications in 2010. Julian Bond helped found the Student Nonviolent Coordinating Committee (SNCC) and is currently professor of history at the University of Virginia in Charlottesville. Michael Eric Dyson is a professor of sociology at Georgetown University and the author of sixteen books, including April 4, 1968: Martin Luther King, Jr.’s Death and How It Changed America (Basic Civitas Books, 2008). Paul Farber is currently completing his doctorate in American studies at the University of Michigan, Ann Arbor.
Loading...
or
Not Currently Available for Direct Purchase