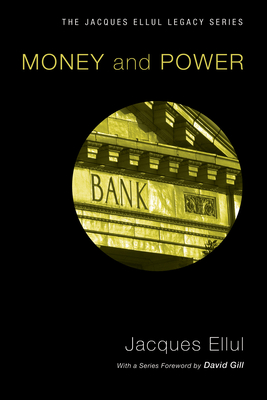 Jacques Ellul exposes the folly of a purely societal approach -- whether communism, collectivism, socialism, or capitalism -- and argues for individual responsibility. Money, he says, is not neutral, somthing we can use as we like. Instead it is a powerful agent that sets itself against God's kingdom. Tracing the scriptural attitudes toward wealth from Old Testament sacramentalism through New Testament renunciation, he challenges Christians to live by the law of grace and not by the law of the marketplace.

Jacques Ellul (1912 - 1994), long time Professor of the History & Sociology of Institutions at the University of Bordeaux, France, was one of the twentieth century's most important analysts and critics of our emerging technological society --- and any lukewarm, conformist Christianity that fails to salt and light that society and culture. Money and Poweris one of his fifty books that remains as fresh and relevant as when it first came out in 1954.
Loading...
or support indie stores by buying on