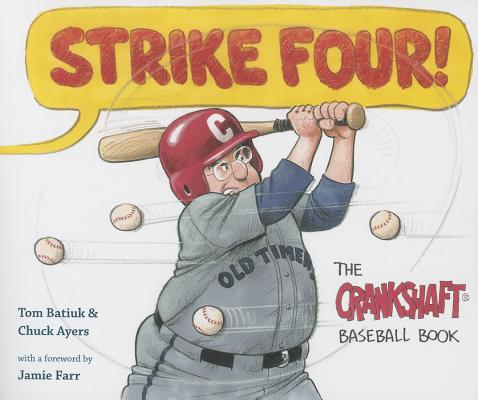 The Toledo Mud Hens--a farm team for the Detroit Tigers--once had a budding pitcher named Ed Crankshaft. At least that's how partners in cartooning, writer Tom Batiuk and artist Chuck Ayers, scripted the main character in Crankshaft. This enjoyable volume collects all of Crankshaft's baseball-themed exploits. Fans will enjoy revisiting Crankshaft's reminisces about his minor league pitching career and his comic attempts to recapture his youthful successes on the diamond.

Strike Four portrays Crankshaft's greatest triumph when, on a sultry summer night in 1940, the Tigers came to town for an exhibition game against the Mud Hens. Pitching for the Mud Hens, Ed faced the top of the Tigers lineup--Hank Greenberg, Charlie Gehringer, and Rudy York--and struck out all three. The next year, the Tigers called Ed up to the major leagues, but unfortunately, so did Uncle Sam. After his service, Crankshaft returned home, but not to play baseball. He married and had two daughters. His grandson Max was his last chance to reprise his baseball career, but it was not meant to be.

Strike Four The Crankshaft Baseball Book allows Batiuk and Ayers to explore a man's life and humorously and touchingly to examine how only barely touching the brass ring shaped it--and left him a little cranky.

Tom Batiuk is a graduate of Kent State University. His Funky Winkerbean and Crankshaft comic strips are carried in more than 600 newspapers worldwide and have an audience of more than 60 million readers. Crankshaft was syndicated in 1987. Chuck Ayers is a graduate of Kent State University. Following graduation, he became the editorial cartoonist for the Akron Beacon Journal. He's been the artist on Crankshaft since its inception and is a huge fan of the Cleveland Indians and Akron Aeros.
Loading...
or
Not Currently Available for Direct Purchase