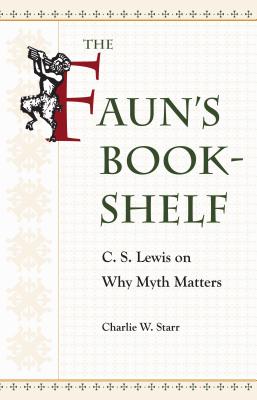 While visiting with Mr. Tumnus in The Lion, the Witch and the Wardrobe, Lucy Pevensie notices a bookshelf filled with such titles as Nymphs and Their Ways and Is Man a Myth? Be- ginning with these imaginary texts, Charlie W. Starr offers a comprehensive study of C. S. Lewis's theory of myth, including his views on Greek and Norse mythology, the origins of myth, and the implications of myth on thought, art, gender, theology, and literary and linguistic theory. For Lewis, myth represents an ancient mode of thought focused in the imagination--a mode that became the key that ultimately brought Lewis to his belief in Jesus Christ as the myth become fact.

Beginning with a fThe Faun's Bookshelf goes on to discuss the many books Lewis imagined throughout his writings--books whose titles he made up but never wrote. It also presents the sylvan myths central to the first two book titles in Mr. Tumnus's library, including explorations of the relation- ship between myth and reality, the spiritual significance of natural conservation, and the spiritual and incarnational qualities of gender.

Starr then turns to the definition of myth, the literary qualities of myth, the mythic nature inherent in divine glory, humanity's destiny to embrace (or reject) that glory, and a deeper exploration of the epistemological ramifications of myth in relation to meaning, imagination, reason, and truth.

Charlie W. Starr is an expert on C. S. Lewis's handwriting and the author of Light: C. S. Lewis's First and Final Short Story. Starr has lectured on Lewis and Tolkien for two decades, consulted on the dating and transcription of hundreds of Lewis manuscripts, and written dozens of popular and scholarly articles on Lewis as well as chapters for several books on Lewis and Tolkien.
Loading...
or
Not Currently Available for Direct Purchase