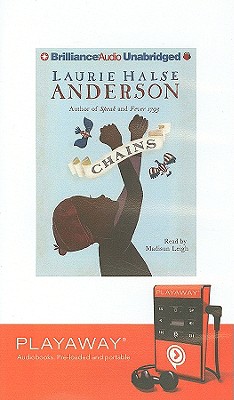 “This is an incredible look at a little discussed topic -- slavery during the Revolutionary War. When Isabel's master dies, she and her sister, Ruth, are sold to Loyalists and shipped to New York City. The only thing that matters to Isabel is that she and Ruth stay together. But, when Ruth is sold in the middle of the night, Isabel does what it takes to find her again, even if it means spying for the rebels.”
— Cathy Berner, Blue Willow Bookshop, Houston, TX
View the List

Freedom. In 1776 New England, that word is on everyonea (TM)s lips. But for 13 year old Isabel the word holds a different meaning, especially after the only mistress she has ever known dies and instead of receiving the freedom promised, she and her younger sister, Ruth, are sold to the Locktons, a wealthy New York family.
In a matter of hours Isabel has to leave bucolic Rhode Island for the hustle and bustle of colonial New York City - a community intensely divided and caught up in the American colonies struggle for independence. As Isabel tries to work out her own freedom, she soon finds herself a pawn in a game of cat-and mouse between the Locktons who are fierce supporters of the king and the growing rebel forces trying to take over the city. Alliances are made and promises are broken and Isabel learns the hard way that the a oefreedoma shea (TM)s being asked to spy for does not extend to her. And when her beloved Ruth is sold off she begins to discover that the only freedom shea (TM)ll ever have is the freedom she takes for herself.
Laure Halse Anderson delivers in this utterly compelling novel that transcends (and that will ultimately redefine) the category of historical fiction. Equal parts political thriller and coming of age story, this impeccably researched yet completely accessible story of a young woman quest for freedom brings the American Revolution to life in all its grand and conflicted glory.