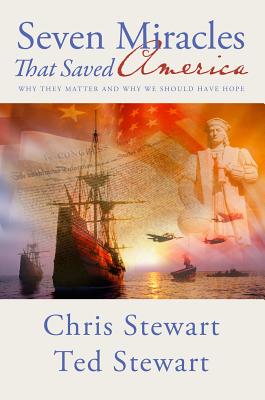 Why They Matter and Why We Should Have Hope

"When the odds were stacked against us, and there have been many times when the great experiment we call America could have and should have failed, did God intervene to save us?"That question, posed by authors Chris and Ted Stewart, is the foundation for this remarkable book. And the examples they cite provide compelling evidence that the hand of Providence has indeed preserved the United States of America on multiple occasions. Skillfully weaving story vignettes with historical explanations, they examine seven instances that illustrate God's protecting care. Never, at any of these critical junctures, was a positive outcome certain or even likely. Yet America prevailed. Why?"No man is perfect," write the authors. "And neither is any nation. Yet, despite our weakness, we are still, as Abraham Lincoln said, the best nation ever given to man. Despite our faults, this nation is still the last, best hope of earth." In short, God still cares what happens here. This reassuring message is a bright light in a world that longs for such hope.

Chris Stewart is a bestselling author who has published more than a dozen books, has been selected by the Book of the Month Club, and has released titles in multiple languages in seven countries. He has also been a guest editorialist for the Detroit News, among other publications, commenting on matters of military readiness and national security concerns. He is a world-record-setting Air Force pilot (fastest nonstop flight around the world) and president and CEO of The Shipley Group, a nationally recognized consulting and training company. Ted Stewart was appointed as a United States District Court Judge in 1999 by President Bill Clinton. Prior to that he served as chief of staff to Governor Michael O. Leavitt, as executive director of the State Department of Natural Resources, as a member and chairman of the Public Service Commission, and as chief of staff to Congressman Jim Hansen. He has been a visiting professor at two state universities, teaching courses in law and public policy.
Loading...
or
Not Currently Available for Direct Purchase