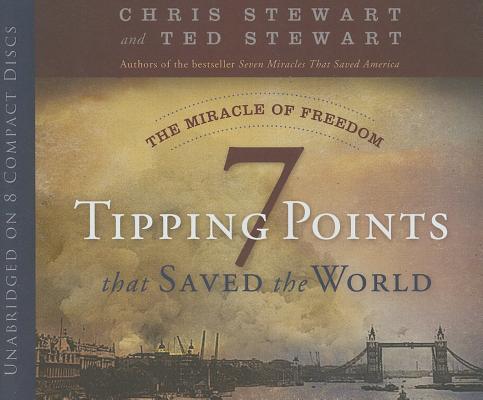 7 Tipping Points That Saved the World

Most people would be surprised to learn that fewer than 12 of the 193 countries in the world today have a democratic government that has survived for more than fifty years. In this remarkable bestselling book, now in paperback, authors Chris Stewart and Ted Stewart examine seven miracles that changed the course of the world and paved the way for the freedoms of democratic government. The authors take actual historical events and skillfully weave in story vignettes to fully flesh out compelling details. They make the case that history would have been dramatically altered if any of these events turned out differently and affirm, as our Founding Fathers did, that a providential hand was at play in securing our freedom.
The book explores seven pivotal people in world events which helped form our democracy, including:
A handful of Greek soldiers and their naval commanders in a life-or-death confrontation with the Persians in 480 BC.
A small band of Frankish soldiers who stood against the conquering armies of Islam more than 1,300 years ago.
The people of Great Britain who refused to surrender to the overwhelming power of Hitler's Third Reich.

Chris Stewart is a bestselling author who has published more than a dozen books. He is a world-record-setting Air Force pilot and president and CEO of The Shipley Group, a nationally recognized consulting and training company.

Ted Stewart was appointed as a United States District Court Judge in 1999 by President Bill Clinton. Prior to that, he served as chief of staff to Governor Michael O. Leavitt and in various executive positions in government.
Loading...
or
Not Currently Available for Direct Purchase