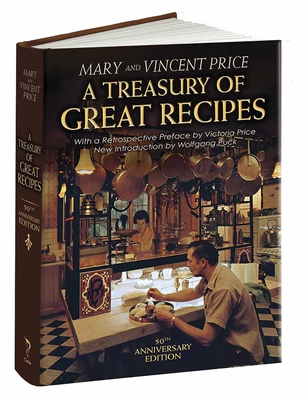 A collectible classic. With his cookbook in print again, Vincent Price lives on. -- NPR
The rare cookbook that is still relevant. -- Zanne Early Stewart, former editor, Gourmet
I think the recipes in this cookbook are classic and still resonate with Americans today. -- Chef Thomas Keller, Per Se and Bouchon restaurants
The Proust in all of us will relish the profiles of ghosts like Le Pavillon and the Forum of the Twelve Caesars in New York, the original La Pyramide in France and Bali in Amsterdam. -- The New York Times
Good cooking is where you find it, according to the authors of this unique collection, whose international smorgasbord ranges from the haute cuisine of Europe's finest restaurants to the juicy hot dogs at Dodger Stadium. In perhaps the first celebrity cookbook, famed actor Vincent Price and his wife, Mary, present mouthwatering recipes from around the world in simplified, unpretentious forms that anyone can make and enjoy. Selected from London's The Ivy, Madrid's Palace Hotel, New York's Sardi's, and other legendary establishments, the recipes are accompanied by witty commentaries, while color photos and atmospheric drawings by Fritz Kredel make this one of the most beautiful books of its kind. Includes a Retrospective Preface by the couple's daughter, Victoria Price, and a new Foreword by Wolfgang Puck.
A perfectly preserved snapshot of food culture in 1965. Price used his considerable resources to collect extraordinary dining experiences across the U.S., Mexico, and Europe, and then documented and opined like a madman. -- Saveur
The real joy of A Treasury of Great Recipes is the way it transports you to another world. -- The New York Journal Review of Books

American actor Vincent Price (1911-93) was well known for his distinctive voice and serio-comic performances in horror films from the latter part of his career. He and his wife, costume designer Mary Grant Price (1917-2002), were avid art collectors and gourmets.