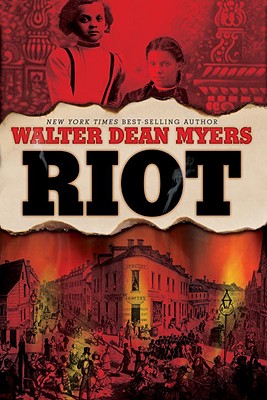 "As the Civil War rages, another battle breaks out behind the lines.
"During a long hot July in 1863, the worst race riots the United States has ever seen erupt in New York City. Earlier that year, desperate for more Union soldiers, President Abraham Lincoln instituted a draft a draft that would allow the wealthy to escape serving in the army by paying a $300 waiver, more than a year's income for the recent immigrant Irish. And on July 11, as the first drawing takes place in Lower Manhattan, the city of New York explodes in rage and fire. Stores are looted; buildings, including the Colored Foundling Home, are burned down; and black Americans are attacked, beaten, and murdered. The police cannot hold out against the rioters, and finally, battle-hardened soldiers are ordered back from the fields of Gettysburg to put down the insurrection, which they do brutally.
Fifteen-year-old Claire, the beloved daughter of a black father and Irish mother, finds herself torn between the two warring sides. Faced with the breakdown of the city the home she has loved, Claire must discover the strength and resilience to address the new world in which she finds herself, and to begin the hard journey of remaking herself and her identity.
Addressing such issues as race, bigotry, and class head-on, Walter Dean Myers has written another stirring and exciting novel that will shake up assumptions, and lift the spirit.

Walter Dean Myers is the critically acclaimed author of such celebrated novels for youth as the "New York Times" Best-Selling "Monster"; the Newbery Honor winning "Somewhere in the Darkness" and "Scorpions"; "Shooter," the basis for the 2009 film "Case 219"; and the Coretta Scott King Award winning "Fallen Angels" and "Slam."

An avid student of history, Myers collects photographs and documents on African American life up to the 1950s. His collection has been featured in both his own nonfiction and in documentaries on American history. Many pieces relating to the background of the New York City Draft Riots may be found in this volume or online at www.egmontusa.com. When not writing or collecting, Myers spends his time cooking, playing the flute, or attending the theater.

You may visit him online at www.walterdeanmyers.net."
Loading...
or
Not Currently Available for Direct Purchase