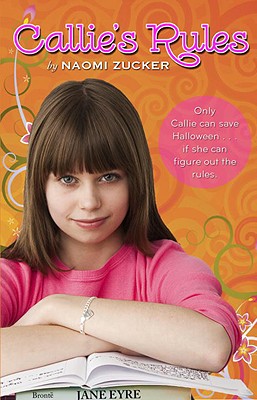 Callie's Rules for Things to Do in Middle School:
.Have lots of pictures in your phone.
.Get a phone.
Callie Jones is excited about her first day of sixth grade, but from the moment she arrives and is greeted by dirty looks (apparently, you don t ride your bike to middle school), she realizes that there are a set of unwritten rules that everyone seems to know everyone except her. So Callie decides she ll write a list of the rules, and she ll never go wrong again.
At home, Callie's close-knit family is making big Halloween plans, until the parents of snotty Valeri Van Dine convince the Town Council to cancel Halloween and replace it with Autumn Fest, a celebration of wholesome American values.
Callie doesn t think their arguments make much sense, and the Council keeps making rules so they don t have to listen. So Callie decides it's time to make some rules of her own.

"Wait until you meet Callie and her family. They're warm and appealing, but mostly they're unusual. They stand up for what they believe in, no matter what! I loved them all, even the dragon!"
--Patricia Reilly Giff

Naomi Zucker is the author of "Benno s Bear," as well as several books for adults. She lives with her husband in Kingston, Rhode Island, where she s working on Callie s next adventure. You can visit Naomi online at www.naomizucker.net."
Loading...
or
Not Currently Available for Direct Purchase