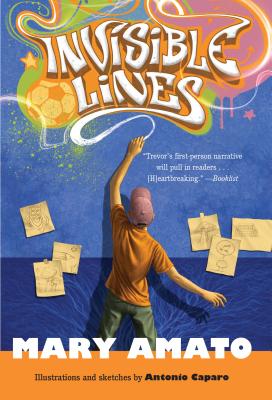 "If there's one thing I'm good at it's making people laugh because when I'm standing up I'm what you call a stand-up comedian, and when I'm sitting down, I'm just plain funny."

It's lucky that Trevor is funny, because this year he needs a sense of humor. Moving to his new home is hard enough--the sign for his neighborhood reads Hedley Gardens, but everyone calls these projects Deadly Gardens. And the move to a fancy new school is even harder. All the kids from Deadly Gardens seem to be in the same classes and keep to themselves, but somehow Trevor's ended up in an advanced science class with kids who seem to have everything and know everything, including how to please their strange new teacher.

Someone else might just give up, but Trevor has plans. This is going to be his year. And he is going to use whatever he has, do whatever it takes, to make it at this new school. Trevor knows he's got some stuff to show. No one is better at juggling in soccer, and he knows he can draw--he calls himself the Graffiti Guy. But Xander, a star in the classroom and on the soccer field, has other plans for Trevor. He doesn't like anyone trespassing on his turf and begins to sabotage Trevor at every opportunity. Who is going to believe Trevor over the school star? Is there any way that Trevor can achieve his goals against a guy who is as good at bullying as he is at everything else?

Mary Amato is making a name for herself as the author of quirky books that kids just love. Her debut novel, The Word Eater, appeared on many state lists, and The Naked Mole-Rat Letters followed suit, gathering even more fans. She is also the author of a chapter book series starring the Riot Brothers, which began with Snarf Attack, Underfoodle, and The Secret of Life: The Riot Brothers Tell All, about which School Library Journal wrote, "Move over Captain Underpants, a couple of new pranksters are in town.... (r)eaders will beg for a sequel." You can visit her online at www.maryamato.com.
or
Not Currently Available for Direct Purchase
Copyright © 2020 American Booksellers Association