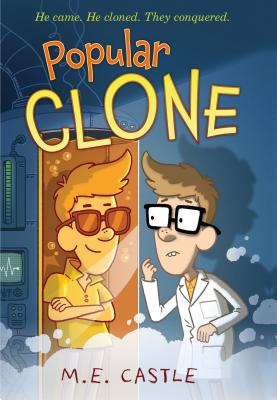 Meet Fisher Bas: 12 years-old, growth-stunted, a geeky science genius, and son of the Nobel Prize-winning creators of the Bas-Hermaphrodite-Sea-Slug-Hypothesis. No surprise: Fisher isn't exactly the most popular kid in his middle-school, tormented daily by the beefy, overgrown goons he calls The Vikings. But he senses relief when he comes upon the idea of cloning himself--creating a second Fisher to go to school each day while he stays at home playing video games and eating cheetos with ketchup. It's an ingenious plan that works brilliantly, until Fisher's clone turns out to be more popular than him--and soon after gets clone-napped by the evil scientist Dr. Xander. Can Fischer save his clone in time, or will his whole plan be exposed?

M.E. Castle is a writer and actor working in the glorious center of the universe, New York City. He graduated from Oberlin College in 2008 with a degree in Theatre and has written a number of short stories, only a handful of which have ever been seen by an audience wider than his closest friends. Throughout his college years, he was one of the leading writers of the noir detective radio drama "The Dead Hear Footsteps," to which he also lent his vocal talents. "Popular Clone" is M.E.'s first novel. He lives in New York City.

Castle’s debut, the first in a planned series, strikes just the right balance of humor and action and is sure to keep young readers turning the pages. Fisher’s struggles to fit in, to relate to girls and to uncover and preserve his true self feel genuine, making him a misfit and unlikely hero worth rooting for.

Endearingly awkward and eminently likable (despite what his classmates might think), Fisher is a protagonist to root for, and his ultimate triumph over both the bullies and Dr. X offers a pleasing bit of wish fulfillment to any kid who has ever dreaded the beginning of the school week…[R]eaders will likely end up fantasizing about what they could get away with if only they too had a Two.  – The Bulletin of the Center for Children’s Books

This fun novel is for kids who like Anthony Horowitz’s “Alex Rider” series (Philomel) and can handle the challenging scientific vocabulary.  – School Library Journal

I recommend Popular Clone for middle school aged students and anyone who can relate to just wanting to avoid bullies and conflict. Anyone who has ever faced a crisis in self-esteem will see a little bit of themselves in Fisher.  – YahooVoices

This is the first book from a new author in what promises to be a very entertaining series, full of humor, suspense, middle school drama and nifty high-tech gadgetry.  – The Buffalo News