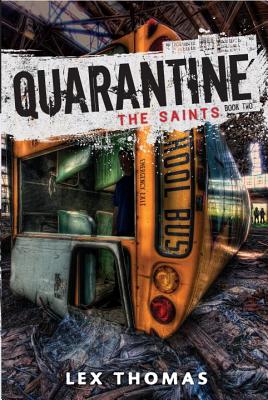 A cross between the Gone series and Lord of the Flies, Quarantine #2: The Saints continues this frenetically paced and scary young adult series that illustrates just how deadly high school can be.

Nothing was worse than being locked in--until they opened the door...
McKinley High has been a battle ground for eighteen months since a virus outbreak led to a military quarantine of the school. When the doors finally open, Will and Lucy will think their nightmare is finished. But they are gravely mistaken.

As a new group of teens enters the school and gains popularity, Will and Lucy join new gangs. An epic party on the quad full of real food and drinks, where kids hookup and actually interact with members of other gangs seemed to signal a new, easier existence. Soon after though, the world inside McKinley takes a startling turn for the worse, and Will and Lucy will have to fight harder than ever to survive.
The Saints brings readers back to the dark and deadly halls of McKinley High and the QUARANTINE series.


Praise For The Saints…

"With its morally dubious characters, charged sexual content, and double-take violence, this might be the darkest series going. Meanwhile, Lord of the Flies allusions (the adults’ benevolent arrival and, believe it or not, a pig hunt), add further interest. Here’s our demand: deliver the conclusion yesterday." *

Lex Hrabe was a Drama Geek in high school as well as student body president, but in spite of his affiliations, he probably wouldn't have lasted a week if his school had been quarantined. Lex received a BA in Drama and English from the University of Virginia and has worn hats as an actor, director, and writer. In addition to working as a screenwriter, he heads development at Cinespire Entertainment, a boutique production company (www.cinespire.com).

If Thomas Voorhies were a character in the Quarantine trilogy, he would be a member of the Art Geek gang. Thomas graduated with a Bachelor of Fine Arts from the Rhode Island School of Design and continues to practice and exhibit his realist oil paintings. When he isn't writing or painting out of his home in Los Angeles, he is either watching movies or watching even more movies. To see a selection of his artwork, visit www.thomasvoorhies.com.
Loading...
or
Not Currently Available for Direct Purchase