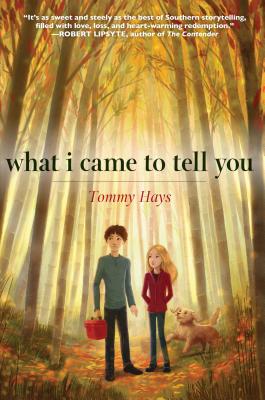 What I Came to Tell You

Since his mother died earlier this year, Grover Johnston (named after a character in Thomas Wolfe's Look Homeward Angel) has watched his family fall to pieces as his father throws himself into his work rather than dealing with the pain. Left to care for his younger sister, Sudie, Grover finds solace in creating intricate weavings out of the natural materials found in the bamboo forest behind his North Carolina home, a pursuit that his father sees only as a waste of time. But as tensions mount between father and son, unlikely forces conspire to help the Johnstons find their way.

The new tenants in the rental house across the street who have come from deep in the Carolina hills seem so different from the Johnstons, but become increasingly intertwined with them in unexpected ways. Classmates, neighbors, teachers, and coworkers band together, forming a community that can save a family from itself.

In the spirit of such beloved novels as Newbery Medal-winning Missing May and Because of Winn-Dixie, What I Came to Tell You, the first middle-grade novel from critically acclaimed Asheville author Tommy Hays, is a story of grief, love, and hard-won redemption. Warm, evocative writing blends with an emotion-laden narrative that cuts to the heart of the reader.

Praise For What I Came to Tell You…

"Though the book spans just a few months, it's packed with incident and complex connections between a range of characters. Hays is especially strong at depicting the network of people, old and young, who help Grover and his family move through their grief and, along the way, save his beloved forest." --Publishers Weekly, STARRED review

Tommy Hays is the author of three novels for adults, including "The Pleasure Was Mine." He is Executive Director of the Great Smokies Writing Program and a lecturer in the Master of Liberal Arts Program at the University of North Carolina at Asheville. He lives in Asheville with his family.
Loading...
or
Not Currently Available for Direct Purchase