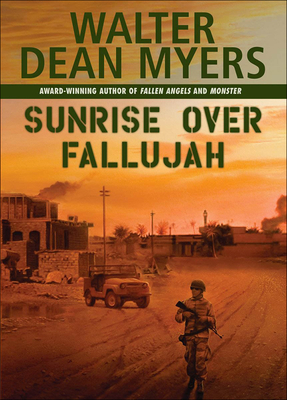 Robin "Birdy" Perry, a new army recruit from Harlem, isn't quite sure why he joined the army, but he's sure where he's headed: Iraq. Birdy and the others in the Civilian Affairs Battalion are supposed to help secure and stabilize the country and successfully interact with the Iraqi people. Officially, the code name for their maneuvers is Operation Iraqi Freedom. But the young men and women in the CA unit have a simpler name for it:

In this new novel, Walter Dean Myers looks at contemporary war with the same power and searing insight he brought to the Vietnam War in his classic, FALLEN ANGELS. He creates memorable characters, like the book's narrator, Birdy, a young recruit from Harlem who's questioning why he even enlisted; Marla, a tough-talking, wisecracking gunner; Jonesy, a guitar-playing bluesman who just wants to make it back to Georgia and open a club; and a whole unit of other young men and women, and drops them in Iraq, where they are supposed to help secure and stabilize Iraq and successfully interact with the Iraqi people. The young civil affairs soldiers soon find their definition of "winning" ever more elusive and their good intentions being replaced by terms like "survival" and "despair." Caught in the crossfire, Myers' richly rendered characters are just beginning to understand the meaning of war in this powerful, realistic novel of our times.