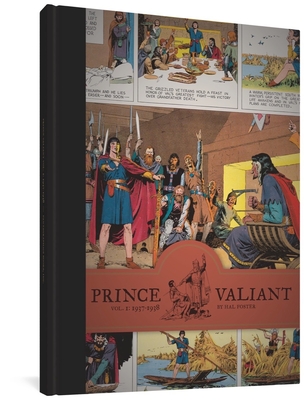 Nominated for a 2010 Will Eisner Comic Industry Award: The most stunningly gorgeous adventure comic strip of all time finally returns in its definitive edition, the first to boast superb testored artwork that captures every delicate line and chromatic nuance of Foster’s original masterpiece.

Universally acclaimed as the most stunningly gorgeous adventure comic strip of all time, Prince Valiant ran for 35 years under the virtuoso pen of its creator, Hal Foster. (Such was its popularity that today, decades after Foster’s death, it continues to run under different hands.)

The giant Sunday-funnies pages (Valiant ran only on Sundays) gave Foster a huge canvas upon which he was able to limn epic swordfights, stunning scenes of pomp and pageantry, and some of the most beautiful human beings—male and female—ever to appear in comics. And he matched his nonpareil visual sense with the narrative instincts of a born storyteller, propelling his daring young hero from one crisis to another with barely a panel to catch one’s breath.

Prince Valiant has previously been widely available only in re-colored, somewhat degraded editions (now out of print and fetching collectors’ prices). Thanks to advances in production technology and newly available original proof sheets, this new series from the industry leader in quality strip classics is the first to feature superb restored artwork that captures every delicate line and chromatic nuance of Foster’s original masterpiece. Comic strip aficionados will be ecstatic, and younger readers who enjoy a classic adventure yarn will be bowled over.

Volume One is rounded out with a rare, in-depth classic Foster interview previously available only in a long out-of-print issue of The Comics Journal, as well as an informative Afterword detailing the production and restoration of this edition.

Hal Foster (1892-1982) created Prince Valiant in 1937. Though remaining involved with the strip until his death in 1982, Foster handed the bulk of the scripting and art chores over to his longtime assistant, John Cullen Murphy, in 1971.

Brian M. Kane is the author of Hal Foster: Prince of Illustrators and James Bama: American Realist. He teaches in the Illustration Department at the Columbus College of Art & Design, Columbus, Ohio. He has a Masters Degree in History of Art from The Ohio State University where he is currently working on his Ph.D. in Art Education with an emphasis in Visual Culture.

Prince Valiant was a comics-page colossus…one of the most celebrated of all comics…the presentation does justice to Foster’s classic creation.

The release... of Prince Valiant, Vol. 1: 1937-1938, the first in a new series of gorgeously printed, hardcover Valiant collections from Fantagraphics Books, served as a bittersweet reminder of the century-long rise and eventual decline of a great American art form, the comic strip.

This is one of the greatest works of American art of the past century…one of the greatest comics of all time…the greatest adventure comic…[Foster’s] drawings are heartbreakingly beautiful. He understands powerful forms and delicate lines…Prince Valiant has been reprinted before, but this book uses his color engraver’s proofs and it’s a world of difference…It’s so beautiful.

Who knew that Prince Valiant, a comic strip I always assumed appeared nest to the word ‘boredom’ in the dictionary, was so vibrant, colorful, action-packed and gosh-darned fun?...This new edition ups the ante not just through the fancy hardcover, but via state of the art technology that allows for a pristine detail and rich color…In a world where too often most art turns out to be exactly as shallow as first glance suggests, it’s nice to discover that something like Prince Valiant is capable of surprising, and even enthralling, the modern reader.


It’s difficult to laud Foster too excessively; he was one of the undisputed masters of the craft. …a handsome oversize volume... [T]he comic strip’s otherworldly setting and taut characterization keep this an evergreen favorite for readers of all ages, an American epic born of a tale of European romance.
— Aaron Ragan-Fore

It’s much more fluid and enjoyable than I would’ve guessed—beautiful work.
— Timothy Hodler

A real thing of beauty…the reproduction is as crystal clear as it can be…[Foster’s] exquisite delicate renderings have influenced so many artists who have come after him and it’s not hard to see why so many people are such huge fans of this master of visual story.
— Joel Meadows

Foster is justly hailed for his stupendous full-pagers, full of panorama and carefully-researched settings.... We moderns are fortunate that  superb reprint editions of these classics are readily available.
— Brenda Clough

This first collection of Hal Foster’s Prince Valiant strips has to be seen to be believed—it’s a lovingly crafted, tabloid-sized book with the highest production values. The artwork has been recreated from Foster’s own engraver’s proofs, providing better quality than even the original newspaper run would have got.... a real treat for fans of the original or new readers looking for some classic medieval adventure.


The new Prince Valiant crackles from the page with an energy and enthusiasm that positively dares anyone to deny this strip’s rightful place in the history of the form. Yes, this is another great day for comics history and most definitely a venture worth supporting into the future.


There was no comic strip in the 1930s or today that is as visually striking as Prince Valiant with its attention to detail and brilliant narrative. Foster presented a panoramic view of Arthurian times and he laid out his strip in film director fashion, beautifully staging his panels…This is graphic storytelling at its finest and a true treasure!

Magnificent reproductions, done in a sturdy hardcover with oversized pages and entirely restored colors and shadings (indeed, those of us who’ve seen Prince Valiant reprint editions in the past will need some mental time to adjust to how much we’ve been missing).

For the first time ever, we’re able to see just how detailed and elaborate Foster’s art really was. The number of fine lines that went into each drawing is impressive, providing a fine texture and grace to every single panel.
— Greg McElhatton

The art is painstakingly detailed. I was struck by Foster’s expert use of speed lines in the fight scenes—there was one panel where I could see how Val’s foot was sliding sideways and digging into the dirt for balance as he was fending off an enemy.... Fantagraphics’ production quality is stellar as usual.

Universally acclaimed as the most stunningly gorgeous adventure of all time, Prince Valiant ran for 35 years under the virtuoso pen of its creator, Hal Foster. The giant Sunday-funnies pages gave Foster a huge canvas upon which he was able to limn epic swordfights, stunning scenes of pomp and pageantry…he matched his nonpareil visual sense with the narrative instincts of a born storyteller, propelling his daring young hero from one crisis to another…Comic strip aficionados will be ecstatic, and younger readers who enjoy a classic adventure yarn will be bowled over.