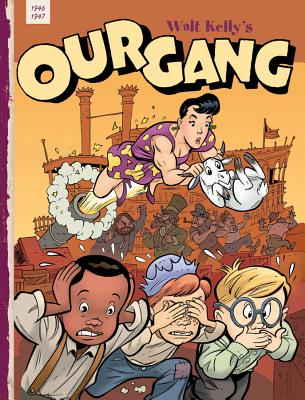 The Rascals are back in another 100-plus vintage full-color pages of rollicking comedy and high adventure. Created in 1946 and 1947, these stories show Walt Kelly refining the style that would serve him so well for his later masterpiece—Pogo.

Much of this fourth volume is taken up with an extended four-part cycle of stories—almost a graphic novel, really!—in which Froggie and the Gang (including Julip the Goat) ship out with Professor Gravy on his showboat for an engagement downriver, which results (of course) in a series of action-packed adventures involving fisticuffs, gunfire, fireworks, and horse thieves. All this, plus more mundane kid pursuits such as a hotly-contested baseball game.

As always, series editor Steve Thompson is on hand to provide fascinating behind-the-scenes details on these marvelous stories. For anyone who loves those simple, innocent post-war times, the Our Gang stories are as refreshing as a five-cent glass of home-made lemonade on a hot summer day.

Walt Kelly is the creator of the legendary Pogo comic strip. He was born in 1913 and passed away in 1973.

Jeff Smith is the award-winning creator of the comic books Bone and RASL.

That this series was written and drawn by the great Walt Kelly is icing on the cake for comics fans. Walt Kelly was to the Our Gang comic books what Hal Roach had been to the movie series: creator and godfather.

A sweet, idiosyncratic collection of comics, suitable for nostalgic adults and adventurous kids alike... An exuberant and transportive collection.
or
Not Currently Available for Direct Purchase
Copyright © 2020 American Booksellers Association