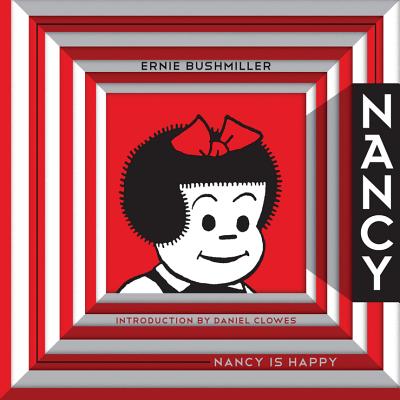 A funny thing happened on the way to comic-strip immortality. For many years, Ernie Bushmiller’s Nancy, with its odd-looking, squat heroine, nearly abstract art, and often super-corny gags, was perceived as the stodgiest, squarest comic strip in the world. Popular with newspaper readers, true — but definitely not a strip embraced by comic-strip connoisseurs, like Krazy Kat, Dick Tracy or Terry and the Pirates.

But then those connoisseurs took a closer look, and began to realize that Bushmiller’s art approached its own kind of cartoon perfection, and those corny gags often achieved a striking zen quality. In its own way, it turned out Nancy was in fact the most iconic comic strip of all. (The American Heritage Dictionary actually uses a Nancy strip to illustrate its entry on “comic strip.”)

Beginning in the Winter of 2011, fans will be dancing with joy as Fantagraphics unveils an ongoing Nancy reprint project. Each volume contain a whopping full four years of daily Nancy strips (a Sunday Nancy project looms in the future), collected in a fat, square (what else, for the “squarest” strip in the world?) package designed by Jacob (Popeye, Beasts!, Willie and Joe) Covey.

This first volume will collect every daily strip from 1943 to 1946. (Fantagraphics will eventually release Nancy’s first five years, 1938-1942, but given the scarcity of archival material for these years we are giving ourselves some extra time to collate it all.)

This first Nancy volume will feature an introduction by another stellar Bushmiller fan, Daniel Clowes (from whose collection most of the strips in this volume were scanned), a biography of the artist, and much more.

Ernie Bushmiller (1905-1982) inherited the glamour-girl Fritzi Ritz strip in 1925. But Fritzi’s niece Nancy, introduced in 1933, soon began to dominate, and in 1938 the strip officially became nancy. Bushmiller would continue to write and draw it until his death, winning the Reuben Award for best comic strip in 1976.

Daniel Clowes is a celebrated graphic novelist, Academy-Award nominated screenwriter, and frequent cover artist for the New Yorker. He is a multi-Harvey, Eisner, and Ignatz Award Winner, and his papers were recently acquired by the University of Chicago library. He lives in Oakland, CA.
or
Not Currently Available for Direct Purchase
Copyright © 2020 American Booksellers Association