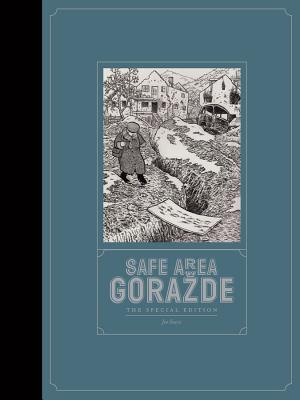 Joe Sacco’s best-selling follow-up to Palestine is now available in a special edition, at a special price.

In the wake of his acclaimed Palestine, Joe Sacco spent four months in Bosnia in 1995-1996, immersing himself in the human side of life during wartime, researching stories rarely found in conventional news coverage. The book focuses on the Muslim enclave of Gorazde, which was besieged by Bosnian Serbs during the war; Sacco spent four weeks in Gorazde, entering before the Muslims trapped inside had access to the outside world, electricity or running water.

Released in 2000, Safe Area Gorazde confirmed Sacco as one of the preeminent journalists of his time, and earned him a 2001 Guggenheim Fellowship. Now for its 10th anniversary, Fantagraphics is releasing an expanded hardcover edition which, much like 2007’s Palestine: The Special Edition, supplements the original work with page after page of related drawings, on-site sketches, photographs, and transcripts from Sacco’s notes.

Harrowing and bleakly humorous, Sacco’s account of life during the
Balkan conflict is a timeless portrait of ordinary people caught in desperate
circumstances. It’s also a work of genius in an unlikely genre: journalism in
comic book form.

[Demonstrates] how brilliantly comics can serve as reportage.

Joe Sacco lives in Portland, Oregon. He is the author of many acclaimed graphic novels, including Palestine, Safe Area Gorazde, But I Like It, Notes from a Defeatist, The Fixer, War's End, and Footnotes in Gaza.
or
Not Currently Available for Direct Purchase