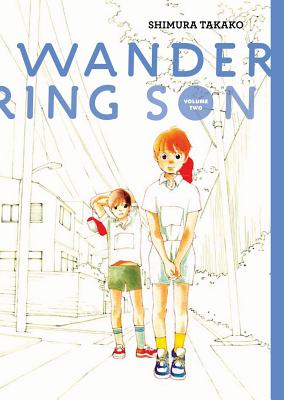 Our heroes enter the sixth grade in volume two of this legendary series.

In the second volume of Shimura Takako's superb coming-of-age story, our transgendered protagonists, Shuichi and Yoshino, have entered the sixth grade. Shuichi spends a precious gift of cash from his grandmother on a special present for himself, a purchase that triggers a chain of events in which his sister Maho learns his secret, and Shuichi inadvertently steals the heart of a boy Maho in interested in.

The “woman” who showed so much interest in Yoshino (when she was wearing a boy’s school uniform) in volume one reappears with “her” boyfriend, and becomes a mentor and friend to the two children. And the kids go on a class trip that is a rite of passage Shuichi would rather pass up. Shuichi is called a “faggot” by another boy, and the dramatic nature in which Saori comes to Shuichi’s defense leads the two to discover a shared fondness for Anne of Green Gables. But despite his propensity to cry (a propensity noted repeatedly by his more outgoing sister), Shuichi finds strength and courage he didn’t know he had.

…[Wandering Son] book 2 continues the excellent work of book 1 and raises the emotional stakes a bit.... There’s... a slowly unfolding pleasure to Shimura’s story. Sensitive to the plight of young teenagers and potentially transgender youth alike, she’s managed to create a compelling story without including much that, considered in isolation, is particularly dramatic, which speaks to the realism of her efforts.

Shimura Takako’s young figures are adorable. They look unspoiled, with their future ahead of them, which puts their struggles into greater relief.... Translator Matt Thorn’s essay… provid[es] valuable information on cultural context… There is no more handsome manga than Fantagraphics’ presentation of Wandering Son.