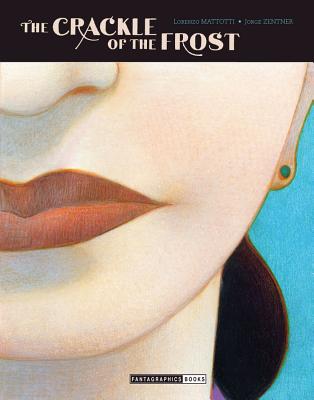 The Crackle of the Frost

Full-color graphic novel of love and loss from the co-creator of Stigmata and The Raven.

When confronted with his girlfriend’s request that they have a child together, Samuel fled that relationship. But now, a year later, when he receives a letter from Alice announcing she is expecting a baby, old emotions flare up and he embarks on a long journey to see Alice again — to re-open, or perhaps close forever, that important chapter of his life. The Crackle of the Frost is the story of what he sees, hears, experiences, and learns during that journey.

Last year, Fantagraphics presented the extraordinary Stigmata, a stunning display of Mattotti’s whirling, emotional, black and white linework put in the service of a devastating story — as well as his painted illustrations for Lou Reed’s The Raven. The Crackle of the Frost ups the visual ante even on those masterpieces, combining the narrative drive of the former with the lush color illustrations of the latter to create a graphic-novel masterpiece with panel after panel of sumptuous full-color paintings, as if Edward Hopper had suddenly decided to jump into comics.

Lorenzo Mattotti is a highly sought-after illustrator ( with frequent appearances in and on The New Yorker) and acclaimed graphic novelist. He lives in Paris, France; his work includes The Raven, a collaboration with Lou Reed re-imagining the works of Edgar Allan Poe.

Jorge Zentner has written many graphic novels, including the Pampa series illustrated by Carlos Nine. This is his first graphic novel to be translated into English.

Kim Thompson (1956-2013) was born in Copenhagen, Denmark. He was the co-publisher of Fantagraphics Books and a champion of alternative and global comics. He lived in Seattle, WA, with his wife, Lynn, and their dog.