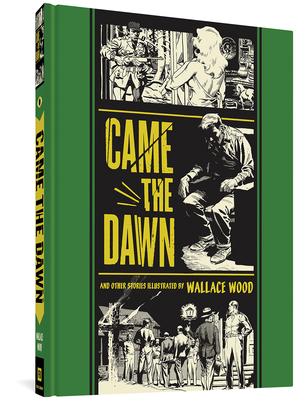 Came The Dawn And Other Stories (The EC Comics Library #2)

Horror and crime shockers from the EC vaults, illustrated by a comics grandmaster.

Wallace Wood applied his preternaturally lush brushwork to over two dozen stories in the thematically overlapping (“dreadful things happen to people, both innocent and guilty”) horror, crime, and suspense genres. This work is the subject of one of the two premiere releases in Fantagraphics’ highly-anticipated new EC reprint line.

Taking its title from one of Wood’s all-time classics, the evil little paranoid thriller “Came the Dawn,” this collection features page after page after page of Wood’s sleek and meticulously crafted artwork put in the service of cunning twist-ending stories, most often from the typewriter of EC editor Al Feldstein.

These tales range from supernatural shockers from the pages of Tales From the Crypt and The Haunt of Fear (“The Living Corpse,” “Terror Ride,” “Man From the Grave,” “Horror in the Freak Tent”) to often pointedly contemporary crime thrillers from Crime SuspenStories (“The Assault,” “The Whipping,” and “Confession,” which was singled out for specific excoriation in the anti-comics screed Seduction of the Innocent, thus giving it a special cachet), but the breathtaking art and whiplash-inducing shock endings are constants throughout.

Like every book in the Fantagraphics EC line, “Came the Dawn!” will feature extensive essays and notes on these classic stories by EC experts — but the real “meat” of the matter (sometimes literally, in the grislier stories) will be supplied by these often lurid, sometimes downright over-the-top, but always compelling and superbly crafted, classic comic-book masterpieces.

Gary Groth is the co-founder of The Comics Journal and Fantagraphics Books. He lives in Seattle.
Loading...
or support indie stores by buying on
(This book is on backorder)