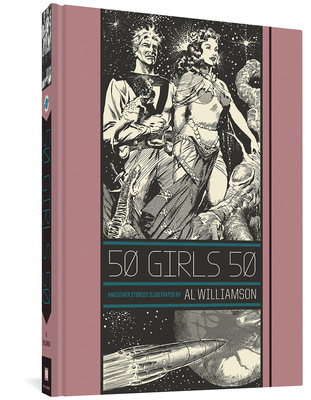 This entry in the EC series focuses on Al Williamson’s comics work, primarily in the sci-fi genre.

Barely old enough to drink when he joined the EC Comics stable, Al Williamson may have been the new kid on the block, but a lifetime of studying such classic adventure cartoonists as Alex Raymond (Flash Gordon) and Hal Foster (Prince Valiant) had made him a kid to reckon with — as he proved again and again in the stories he created for EC’s legendary “New Trend” comics, in particular Weird Science and Weird Fantasy. As a result of Williamson’s focus, it’s possible to compile all of Williamson’s “New Trend” EC work into one book — which Fantagraphics is finally doing here. Sci-fi aficionados should note that although most of the stories were written by Al Feldstein, 50 Girls 50 features three of EC’s legendary Ray Bradbury adaptations, including “I, Rocket” and “A Sound of Thunder” — and a unique curiosity, a strip adapted from a short story submitted by a teenage Harlan Ellison. Williamson ran with a gang of like-minded young Turks dubbed the “Fleagle Gang,” who would help one another out on assignments. Thus this book includes three stories upon which Williamson was joined by the legendary Frank Frazetta, and one story (“Food for Thought”) where Roy Krenkel provided his exquisite alien landscapes, to make it one of the most gorgeous EC stories ever printed. As a supplementary bonus, 50 Girls 50 includes three stories drawn by Fleagles sans Williamson: Frazetta’s Shock SuspenStories short “Squeeze Play”; Krenkel’s meticulous “Time to Leave”; and Angelo Torres’s “An Eye for an Eye,” an EC story that famously fell prey to censorship and was not released until the 1970s. As with other Fantagraphics EC titles, 50 Girls 50 will also include extensive story notes by EC experts.

[Williamson] loved adventure, with impossibly beautiful women and virile men, musculature and erotically taut flesh on display. He was perfect for the EC sci-fi series, perhaps because the extremity of surviving outer space and planets with weird monsters put these perfect human specimens on display. But there’s something else: some of the most telling EC stories of this kind are not set in outer space at all, but in humanity’s struggle for survival in the aftermath of atomic war.
— Paul Buhle - Rain Taxi

Al Williamson (b. 1931, d, 2010) was a comics artist best known for his work on EC's Weird Science and Weird Fantasy comics titles (and, later, Creepy and Eerie, comics magazines that featured EC alumni). He also adapted Star Wars into comics, and worked on the newspaper strips Flash Gordon and Secret Agent X-9, both creations of Alex Raymond. He also inked various Marvel superhero comics, and was inducted into the Will Eisner Hall of Fame in 2000.