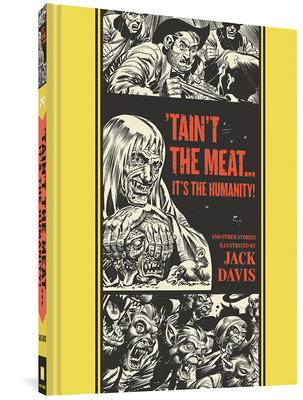 'Taint The Meat...It's The Humanity! And Other Stories (The EC Comics Library #3)

This entry in the EC series focuses on Jack Davis’s work, with an emphasis on the horror genre.

Tales From the Crypt was the quintessential American horror comic book, and Jack Davis the quintessential Tales From the Crypt artist: A brilliant virtuoso whose long-limbed, cartoony-but-hyperdetailed slapstick both cut against and amplified the weird and nauseating grotesqueries that spilled from the EC Comics writers’ fevered minds, including — as seen in this volume — “’Taint the Meat... It’s the Humanity,” an evil-butcher horror story that ends pretty much like you’d expect any evil-butcher horror story to end. Presenting the classic EC material in reader-friendly, artist-and-genre-centric packages for the first time, ’Taint the Meat collects every one of Davis’s 24 Crypt stories in one convenient, gore-drenched package. Mostly written by EC editor Al Feldstein, these stories run the gamut from pure supernatural horror (the werewolf story “Upon Reflection” and the vampire story “Fare Tonight, Followed by Increasing Clottyness…”) to science gone horribly wrong (“Bats in My Belfry!”), as well as the classic “disbeliever gets his comeuppance” story (“Grounds… For Horror!”) to EC’s bread and butter, the ridiculously grisly revenge-of-the-abused tale (“The Trophy!” and “Well-Cooked Hams!”)… seasoned with buckets of blood and some of the most godawful punning titles ever committed to newsprint. Tales From the Crypt was the inspiration for the no-holds-barred pop-culture horror revolution of the 1970s and later, be it Stephen King, Tobe (The Texas Chainsaw Massacre) Hooper, zombiemeister George A. Romero, or the current generation of extreme-horror practitioners like Eli (Hostel) Roth. Yet try as they may, no one has been able to capture the combination of technical virtuosity, tongue-in-cheek grisliness, and sheer naughty desire to provoke and appall that these classics managed to pull off again and again. ’Taint the Meat… will also include extensive story notes by EC experts from around the world.


Praise For 'Taint The Meat...It's The Humanity! And Other Stories (The EC Comics Library #3)…

Davis was a master in the horror comic Crypt of Terror line. … Davis went on to mainstream success, with thirty years at Mad Magazine, public interest posters, and an armful of awards. Even so, the screaming lady who experiences unimaginable horror as her respectability and life drain away will always remain his signature.

One of America’s most beloved and best known illustrators, Jack Davis was born on December 2, 1924 in Atlanta, Georgia. He passed away in 2016.

Albert B. Feldstein (1925-2014) was an American writer, editor, and artist, best known for his work at EC Comics (particularly in the science fiction genre) and, from 1956 to 1985, as the editor of the satirical magazine Mad.