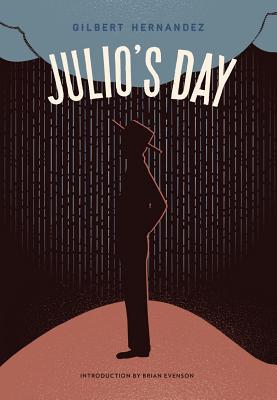 Gilbert Hernandez traces the life of a 100-year-old man from cradle to grave in this fictional graphic novel.

It begins in the year 1900, with the scream of a newborn. It ends, 100 pages later, in the year 2000, with the death rattle of a 100-year-old man. The infant and the old man are both Julio, and Gilbert Hernandez’s Julio’s Day is his latest graphic novel, a masterpiece of elliptical, emotional storytelling that traces one life—indeed, one century in a human life—through a series of carefully crafted, consistently surprising and enthralling vignettes.

"A haunting performance and about as perfect a literary work as I’ve read in years. Hernandez accomplishes in 100 pages what most novelists only dream of—rendering the closeted phlegmatic Julio in all his confounding complexity and in the process creating an unflinching biography of a community, a country and a century. A masterpiece."
— Junot Díaz

Gilbert Hernandez is considered one of our greatest living cartoonists. He co-created the iconic series Love and Rockets, which has been ongoing since 1982, and authored numerous other comics and graphic novels, one of the greatest bodies of work the medium has ever seen. Raised in Oxnard, CA, Hernandez lives with his family in Las Vegas, NV.
Loading...
or
Not Currently Available for Direct Purchase