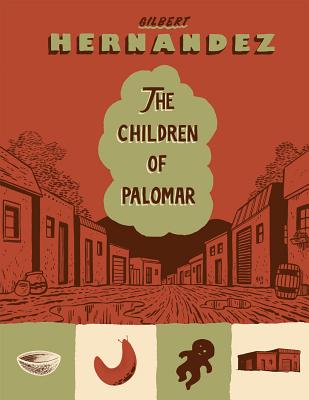 The Children of Palomar (Hardcover)

New Tales of Old Palomar is Gilbert Hernandez’s much-anticipated return to the small Central American town of Palomar, more than a decade after his last “Heartbreak Soup” story. Originally released as a three-issue magazine series in the acclaimed international “Ignatz” format, New Tales Old Palomar is finally collected into one handsome book. All three issues deal with the classic characters of Palomar such as sweet Pipo, her sharp-tongue sister Carmen, sheriff Chelo, and the gang of boys who help start it all: studious Heraclio, tall and fey Israel, disfigured but good-natured Vicente, and girl-crazy Jesús and Satch. In the first story, “Children of Palomar,” mysterious, fast-moving thieves are stealing food from wherever they can grab it; Sheriff Chelo and some citizens do their best to solve this mystery, but nobody seems to be able to catch these bandits in action until Pipo puts her soccer-trained legs to work and goes after them herself. In the second, Gato, Soledad, Guero, Pintor, and Arturo go exploring a bottomless chasm and come face to face with... well, we won’t spoil the surprise. The third and last story focuses on one of Palomar’s most beloved characters, the gorgeous but troubled Tonantzín: Everybody in Palomar seems to take the supernatural with a grain of salt, but young Tonantzín is determined to uncover the mystery of the laughing baby that only appears to her, haunting her daily life. What is the baby’s link to the giant stone idols that stand outside the small town...?

Gilbert Hernandez lives in Las Vegas, NV, with his wife and daughter. He is co-creator of the long-running, award-winning, and critically acclaimed series Love and Rockets.

Praise For The Children of Palomar…

I don’t really understand why the material of Love and Rockets isn’t widely regarded as one of the finest pieces of fiction of the last 35 years. Because it is.
— Neal Gaiman
or
Not Currently Available for Direct Purchase
Copyright © 2020 American Booksellers Association