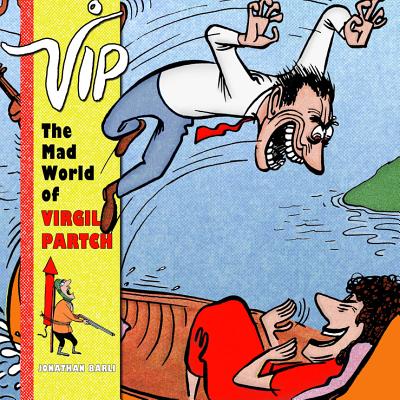 The Mad World of Virgil Partch

The first coffee-table book featuring comics, letters and much more from the mid-century cartoonist who revitalized the gag cartoon.

Only a few months after the devastating attack on Pearl Harbor and the same year that Albert Camus offered the world his bleak vision of man’s existence by introducing his philosophical dictum of The Absurd, Virgil Partch burst onto the scene with his own twist on the phrase. Partch was a cartoonist who offered comic counterpoint to the grim headlines and a unique perspective on human nature in the pages of the nation’s most popular magazines. Known to millions by his jazzy signature, VIP, this comic genius ushered in a new era of the gag cartoon—zany, sometimes surreal, always hilarious—that inspired a generation of fellow cartoonists starting in the 1940s and ’50s. His madcap style of humor was reflected in the cutting-edge comedic sensibilities of Burns & Allen, Jack Benny, Ernie Kovacs, Bob & Ray, Stan Freberg, and Jean Shepherd, and would position Partch as one of the most prolific “gag-men” of his day. VIP contributed to an astonishing array of magazines, wrote gags for other cartoonists, illustrated books, album covers, and advertisements, and adorned merchandise including, appropriately, cocktail glasses. VIP: The Mad World of Virgil Partch is the first time Partch’s life and career has been treated in full, collecting amazing artwork from the entire range of his inspired career and featuring his own writings. Reprinted from original art, primary-source publications, and collectors’ and family archives, VIP’s place in the world of cartooning and humor can finally be fully appreciated in this beautiful coffee-table volume.

Virgil Franklin Partch (October 17, 1916 – August 10, 1984) was one of the most prominent and prolific American magazine gag cartoonists of the 1940s and 1950s. His unusual style, surreal humor and familiar abbreviated signature (VIP) made his cartoons distinctive and eye-catching.

Jonathan Barli is the art director of Rosebud Archives. He lives in New Jersey.
Loading...
or
Not Currently Available for Direct Purchase