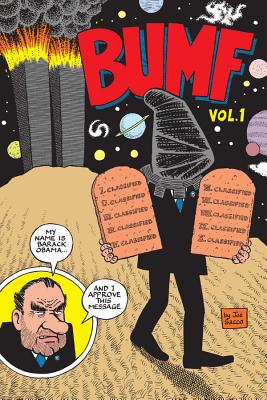 I Buggered The Kaiser

This is a collection of all-new satirical short comics by Joe Sacco (Palestine, Footnotes in Gaza).

In the vein of the old underground comix like ZAP or Weirdo, author Joe Sacco promises that BUMF will go where it needs to go, and do what it needs to do.” Though world-famous for his serious, journalistic books like Palestine, Safe Area Gorazde, and Footnotes in Gaza, Bumf promises to echo back to Sacco’s earlier days as a satirist and underground cartoonist. Bumf is a project that Sacco has been working on in between larger projects like Footnotes in Gaza, indulging his love of satire and cartooning. Often puerile, disgusting, and beyond redemption, Sacco apologized in advance, saying he couldn’t help himself. “They expect better things from me. They’ll never put me on a stamp now.”


Praise For Bumf Vol. 1: I Buggered The Kaiser…

…Bumf Vol. 1 [is] a surreal, undisciplined, ecstatically offensive bit of political satire by Joe Sacco. …Sacco’s unearthly skills as a draftsman haven’t abandoned him… BUMF is a scabrous howl from Sacco’s political id.

…Bumf remixes images of modern warfare to show our inhumanity. … The crudity of Bumf clearly has intent: it will offend right-wingers across America. It’s a book with an expert command of an abhorrent style -- and in this is its substance.

…Bumf Vol. 1 is a timely reminder that no matter how bad things might look, they’re always worse if you look closer. …Sacco remains one of our best living cartoonists, and those with a strong stomach are encouraged to brave the horrors within.

The bastard child of Hogarth and Robert Crumb, measured it most certainly is not. Scabrous and bitingly satirical, its pages swiftly reduce western foreign policy over the past century to a series of ineffably stupid and calamitously prideful war games, and the US presidency to an airless void of buffoonery and corruption…. Bumf is gross, and vastly entertaining.

…Bumf is a radical, savage and hilarious comic.

Here, [Sacco] takes this underground sensibility, inspired by books like Zap and Weirdo, and runs with it much further than he ever could in his more serious books.

The spirit of Bumf is not the arrogant disdain typical of satire but a crushing anguish. … If Bumf doesn’t garner the sort of broad attention and acclaim that Sacco’s previous works have it won’t be because of any lack of passion, imagination, or artistry, but because it’s expressing something that’s genuinely painful.

Sacco’s return to satire after years of steely-eye reportage has been informed by his journey as a journalist, resulting in a brutally acidic, profane, and stunning assault on American politics, exceptionalism, and overall image. Sacco takes as much time taking shots at himself as a reporter and cartoonist as he does in conflating Richard Nixon with Barack Obama in a surreal, grim, but still funny evisceration.
— Rob Clough - The Comics Journal

Knowing where Sacco has been, knowing what he’s seen and drawn humans do to each other, and having seen him talk about his experiences in conflict areas when he was at Erlangen this June, makes this furious indictment of the United States’s human-rights violations infinitely more terrifying and disturbing. This is satire all right, but not the funny kind. It’s ugly, it’s haunting and it’s going to send chills down your spine.
— Marc-Oliver Frisch - Comiks Debris

It’s a cracking, wonderfully sick slice of satire, the sort of satire that has a ragged edge to it to leave an open, oozing wound afterwards, not a clean slice or cut, and even when some scenes make you laugh you’ll also feel guilty and uncomfortable because of what else is going on. And you should. An unusual, funny (filthy too) and darkly satirical work from one of our most acclaimed comics creators, prodding the dark underbelly of Western foreign policy to see what comes out.
— Joe Gordon - Forbidden Planet International

Bumf is a weird and arrant narrative with an astute political edge. It’s the kind of work you might expect from Robert Crumb, Bill Griffith, or S. Clay Wilson more than you would from the creator of Palestine and Safe Area Goražde. … This first volume of Bumf pulls no punches and is certainly one of the great comics of late 2014.

Joe Sacco lives in Portland, Oregon. He is the author of many acclaimed graphic novels, including Palestine, Safe Area Gorazde, But I Like It, Notes from a Defeatist, The Fixer, War's End, and Footnotes in Gaza.
Loading...
or
Not Currently Available for Direct Purchase