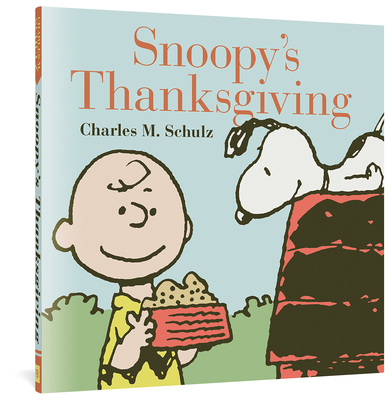 This is a gift-book-size collection of Snoopy/Thanksgiving-themed Peanuts strip story arcs.

Sometimes getting together with friends and family for Thanksgiving isn’t all that it’s cracked up to be, as Snoopy learns when his brother Spike invites him to spend Thanksgiving in the desert, and things don’t quite work out as planned. At least it’s a change of pace for Snoopy, who spends most Thanksgivings with the ol’ supper dish (and one lonely one at the malt shoppe as Joe Cool). It’s also a tense time of year to be a bird who’s afraid of being mistaken for a turkey and roasted, and Woodstock copes with his anxieties in various ways, including by donning a disguise with Snoopy’s help. Meanwhile, Peppermint Patty, Marcie, and Franklin all get sick over their Thanksgiving vacation. Snoopy’s Thanksgiving is the perfect gift book for anyone whose idea of the holiday is more Charlie Brown than Norman Rockwell.