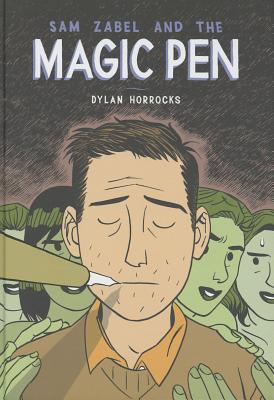 Sam Zabel And The Magic Pen

Acclaimed cartoonist Dylan Horrocks returns with a long-awaited new graphic novel, the first since his perennial classic, 1998’s Hicksville. Cartoonist Sam Zabel hasn’t drawn a comic in years. Stuck in a nightmare of creative block and despair, Sam spends his days writing superhero stories for a large American comics publisher and staring at a blank piece of paper, unable to draw a single line. Then one day he finds a mysterious old comic book set on Mars and is suddenly thrown headlong into a wild, fantastic journey through centuries of comics, stories, and imaginary worlds. Accompanied by a young webcomic creator named Alice and an enigmatic schoolgirl with rocket boots and a bag full of comics, Sam goes in search of the Magic Pen, encountering sex-crazed aliens, medieval monks, pirates, pixies and — of course — cartoonists. Funny, erotic, and thoughtful, Sam Zabel and the Magic Pen explores the pleasures, dangers, and moral consequences of fantasy.


Praise For Sam Zabel And The Magic Pen…

This book is necessary for anyone paralyzed even a bit by the creative/spiritual confusion of the digital age. Horrocks explores the role and responsibility of storytelling, juggling genres, fiddling with the mechanics of the comics form, and reclaiming the sense of magic that once reigned the medium -- a playfulness contagious for the reader. Like his Hicksville, a must have in every library.

Sam Zabel and the Magic Pen is a coming-of-age story for the fantasies of our past and a joyful bear hug for the storytellers of our future. An effortless, magical read from front to back.

...[A] thoughtful, layered graphic novel... The result is sublime: a breezy-reading rumination on the promise and the problems inherent in graphic novels’ complicated history, and the power the creator holds in shaping the medium’s future.
— Aaron Ragan-Fore - Eugene Weekly

Zabel embarks on a journey… [that] transcends the classic cautionary 'be careful what you wish for' tale, reflecting on gender politics in comics and how they intersect with fantasy.
— Hillary Brown - Paste

Sam Zabel and the Magic Pen is, like Hicksville, a meta-comic, a story about what it means to construct and share fictions made out of panels, captions, pictures and words; like Hicksville, it presents a secret history of what comics could or should have been. ... Sam Zabel is, mostly, a thoughtful delight, a celebration of Horrocks’s chosen medium, with powerful supporting characters helpfully present to save the day...

It may sound very cerebral, but the energy and excitement of the storytelling makes Sam’s artistically enlightening experience a thrilling adventure for the reader. …[T]his graphic novel looks at how erotic imagery produced through the male gaze has evolved over the past century, but it never lets the intellectual elements get in the way of the fun. And this book is a LOT of fun… Sam Zabel And The Magic Pen may contain nudity and (not particularly graphic) sexual content, but it’s a great title for teen readers, offering valuable insights about the process of creation and the artist’s ability to challenge or reinforce social ideals.

More Calvino than Borges… The story moves vertiginously between fantasy worlds, as Horrocks stages confrontations between comics’ pulpy and frequently sexist past, and the more female-friendly webcomics and manga of present-day practice. …[T]he book’s real achievement is in the way it manages to be both besotted and furious with cartooning’s speckled history – plus be newly impassioned about the future of comics.
— Sean Rogers - The Globe and Mail

Rampant self-doubt and other real-world obstacles so often encountered by creative types temper the vintage sci-fi weirdness in Sam Zabel and the Magic Pen. ...[I]n artful page layouts and a well-built framework for his observations, Horrocks’ deep love for comics is... apparent in Sam Zabel.

...[A] story that's fun, but ultimately reaffirms the importance of fantasy and escape in our lives. Sam Zabel is funny and thoughtful, moving and beautiful, and much like Horrocks' first book, is a thoughtful meditation on the comics form.

...Sam Zabel and the Magic Pen shows that when the loop of creation to appreciation is complete—and better still if the creative energy spins out on its own unpredictable orbit—that the relationship between audience and artist carries its own sort of eldritch power.

...[H]aving a book like this again reminds me as to why Horrocks is one of the most important cartoonists currently working in comics: his work is honest and often painful, permeating with a sense of heart and warmth and love for the medium that isn’t always so visible in the work of his contemporaries ... Sam Zabel almost seems like a blueprint as to how we can take the stereotypical escapism overdone in the comics and turn them once again into something of true, earnest value...

...[A] fast-paced and multi-level fantasy adventure with a progressive viewpoint and a good-natured wit. In Dylan Horrock’s hands, literary criticism becomes exactly what it is advocating comics to be and that’s a precious feat. ... [The characters] bring forth one of the most unexpected, truest tear-jerkers I have ever seen in a comic — you’ll get misty-eyed for them and for comics in the best possible sense.
— John Seven - Vermicious

Dylan Horrocks is a master. The journey Sam Zabel takes through a magical comic book land is full of references and tropes we all recognize but it also features a moral component that is so thoughtfully laid down that the reader finds themself thinking about the implications for a long time after finishing.
— Aimee LoSecco - 13th Dimension

Sam Zabel and the Magic Pen... is amazing and wonderful. As in Hicksville, the theme here involves fantasy, but with a more mature treatment, one reflective of today’s comic reader. ... The images are astounding. ... Horrocks really understands the visual language of comics and how much can be done with it. ...I found Sam Zabel and the Magic Pen incredibly inspiring. ... Only someone who knows and loves the comic medium could criticize it this deeply and accurately.

Dylan Horrocks lives in New Zealand with his wife and two sons. He is the author of the award-winning graphic novel Hicksville and the comic book series Pickle and Atlas, and has also written for DC Comics and Vertigo, including Hunter: the Age of Magic and Batgirl.
Loading...
or
Not Currently Available for Direct Purchase