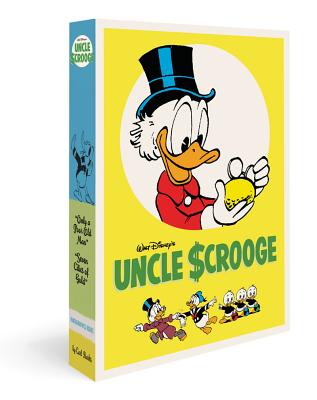 A double dose of the world’s most adventurous duck and his hapless nephew! Walt Disney’s Uncle Scrooge: “Only a Poor Old Man” and Walt Disney’s Uncle Scrooge: “The Seven Cities of Gold” make up this special boxed set of two of our most popular Donald Duck albums to date, exquisitely re-presenting the Duck stories of Carl Barks, one of the most brilliant cartoonists of the 20th century. The lead story of Only a Poor Old Man features the inspiring and tragic tale of how Scrooge McDuck won his fortune — and lost his one true love! The Seven Cities of Gold finds our intrepid Ducks on a treacherous trek to the desert to find the riches of a fabled lost civilization — including a scene that inspired the opening of Raiders of the Lost Ark! Handsomely presented in an attractive box set at a special price that Uncle Scrooge himself would approve.

Carl Barks... was probably the best artist and writer working in the
entire field of comics. ... Ingenious, clever, and funny, the Barks Duck
Books... are as readable and immediate to me as an adult as they were
when I first discovered them as a child.
— Jeff Smith (Bone, RASL)

Carl Barks (1901-2000) spent most of his life in Oregon. In 1987, he was one of the three inaugural inductees in the Will Eisner Comic Book Hall of Fame (along with Eisner and Jack Kirby). He's also a Disney Legend.
Loading...
or
Not Currently Available for Direct Purchase