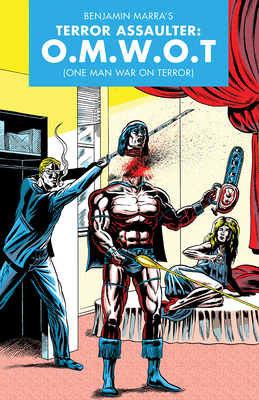 Drawn in a 1990s comic book style and starring the “Terror Assaulter,” this book satirizes American values in much the same way director Paul Verhoeven (Robocop) does.

Cartoonist Benjamin Marra brilliantly satirizes America’s obsession with justice — and disinterest in consequences — via a highly stylized, hypermasculine style that gushes with violence, sex, and international intrigue, battering down the boundaries between psychedelia, political commentary, and aggressive expressionism. Terror Assaulter must defeat Terror at all costs, as long as it leaves time for steamy dates with hot chicks. The man’s codename is O.M.W.O.T. (One Man War On Terror) and he is the world’s greatest protector, and a villain’s worst nightmare. This is a hilarious satire of American foreign policy over the last decade, neocon philosophy, the state of American masculinity and sexuality, and male power fantasy in escapist entertainment.

The Most Badass Graphic Novel Ever Created… It can be read as a trenchant spoof of the jingoistic Bush years or of Z-grade 80’s action films… or it can be read as the worrisome notebook doodles of a demented teenager. Whatever it is, you probably haven’t read anything like it before.
— Dan Meth - Buzzfeed

...Marra expresses his hero’s hyper-exaggerated masculinity... through in the combination of over-the-top fight choreography and quippy dialogue, casting the lead character a wise-cracking action hero. It’s a role that is highlighted by Marra’s art, which juggles grisly killings with sensational action beats and bursts of dark comedy and sexual relief.
— Oliver Sava - The A.V. Club

It’s quite possible that OMWOT isn’t interested in categorization, or explanation, or order. It might just be an exercise in nihilism and narrative chaos. And the thing is, no matter how you read it — as a narrative with more to deliver, as a satire of bad comics, as an exercise in emphasizing ugliness — OMWOT succeeds. It works on every level you try to categorize it under, because it feels, on some level, spiritually pure. It is what it is, because it’s devoted to telling its disturbing story of sex and violence with a completely straight face.

...[S]uper-sexy, uber-sleazy, super-weird... I can’t think of another book that feels like a Peter Saul painting, reads like the diary of someone’s darkest fantasy, and never for a second lets you forget that it’s the most unreal version of a 'realistic' subject ever put to paper. Like a pop song written by a masterful craftsman, there’s never a verse that goes on too long or loses the overall rhythm, even when he’s riffing off into a Hendrix-like frenzy of spontaneity and power chords. The book builds to a complete orchestral crescendo, making its message about the retarded nature of a mind that thrives on pulp violence unmistakably clear. Everything he is hinting at about how this phenomenon is at the center of modern American culture is pretty clear too.
— Josh Bayer - Bin Crawler

If you can imagine Fletcher Hanks collaborating with Larry Hama or Chuck Dixon on a Jack Kirby-inspired, deadpan G.I. Joe parody that was serialized in the back of Playboy in the late 1980s, well, you’d be pretty darn close to what Marra has come up with here. You’d just have to multiply that by a factor of 10 or 20. It’s not for everyone, obviously, but is it any good? Let’s just say… 'Yes, it’s good.'

[Terror Assaulter] is an intricately constructed art comic that presents itself as a stripped down, ultra-simplified action comic. Its satirical elements are hilarious, more so because Marra doesn’t announce them as satire, he plays the whole thing completely straight. Rendered exclusively in primary colors, it’s also a beautifully crafted work, and highly entertaining. Though much of the copious ass kicking and gun blasting in the book is done in the service of Marra’s understated satire, it’s also a hell of a fun read.

Super inspiring. A visceral shining beacon of lightning for lesser cartoonists to marvel at. Does what comics are supposed to do, builds a new world, sometimes a better world... a different, cracked-mirror-view world. It's the world so tightly associated with fantasy itself that it says something essential about comics themselves, resonates on the highest frequency the medium is capable of. Or if it can get higher, f--- it, that's too high.
— Josh Bayer (Raw Power, Theth) - Tech Times

...Terror Assaulter [is] one of the most unique action-based comics to hit the stands in years. ... This is what hardcore punk looks like in comics form, with a hero whose d*** is literally hanging out and guns ready to blow. I can’t wait to read it again.

It’s a beautiful thing. ... I’m waiting for the layers to pile up, a la Tarantino, but right now it’s damn weird art he’s making — ripe for misinterpretation. And yet the work is getting more popular. Weirder and more popular. Something is afoot here. I like it.

Terror Assaulter is weird, and at times uncomfortable... –but in all of its discords the book creates an energy that infuses its anthemic punchlines with real force. ... There’s a really crazy, disturbing, and strange world beyond the edges of Terror Assaulter–and even in glimpses, it is fairly potent.

Everything about this book is over the top, from the bright colors to the violence (exploding vehicles, bullets pounding into flesh, martial arts moves that defy physics). What made me laugh throughout were the very graphic sex scenes with their stilted dialogue, where characters state what is happening as if they’re required to say something. It’s the best send-up of sex scenes in bad action movies that I’ve ever seen.
— Gene Ambaum - Unshelved

Benjamin Marra is the author of several acclaimed graphic novels from Fantagraphics, including Terror Assaulter (O.M.W.O.T.), Night Business, and American Blood. He received a B.F.A. in Illustration from Syracuse University; studied in Florence, Italy; and earned his M.F.A. degree in Illustration from the School of Visual Arts. He lives in Montreal.
Loading...
or support indie stores by buying on
(This book is on backorder)