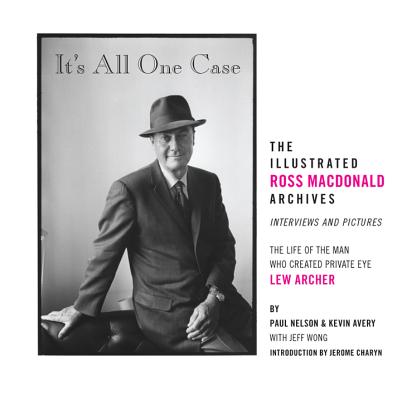 It's All One Case

This is a prose series of unpublished interviews with, and a visual retrospective of, the seminal mid- to late-20th century literary crime writer.

In 1976, the critic Paul Nelson spent several weeks interviewing his literary hero, legendary detective writer Ross Macdonald. Beginning in the late 1940s with his shadowy creation, ruminating private eye Lew Archer, Macdonald had followed in the footsteps of Dashiell Hammett and Raymond Chandler, but ultimately elevated the form to a new level. “We talked about everything imaginable,” Nelson wrote—including Macdonald’s often meager beginnings; his dual citizenship; writers, painters, music, books, and movies he admired; how he used symbolism to change detective writing; his own novels and why Archer was not the most important character—“my God, everything.” It’s All One Case provides an open door to Macdonald at his most unguarded. The book is far more than a collection of never-before-published interviews, though. Published in a handsome, oversized format, it is a visual history of Macdonald’s professional career, illustrated with rare and select items from one of the world’s largest private archives of Macdonald collectibles. Featuring in full color the covers of the various editions of Macdonald’s more than two dozen books, facsimile reproductions of pages from his manuscripts, magazine spreads, and many never before seen photos of Macdonald and his friends (such as Kurt Vonnegut), including those by celebrated photojournalist Jill Krementz. It’s All One Case is an intellectual delight and a visual feast, a fitting tribute to Macdonald’s distinguished career.


Praise For It's All One Case: The Illustrated Ross Macdonald Archives…

A lush coffee table book filled with a dizzying array of graphic materials: countless images of various covers of Macdonald’s novels, clips of his magazine articles, reproductions of parts of his personal letters, pictures of some of the books from his collection, posters advertising the films made from his novels, and on and on.
— Criminal Element

Insightful and engaging, the book is also lovely to look at: It's filled with rare-edition covers of Macdonald's books as well as reproductions of photos of the author with celebrity friends.
— Village Voice

Macdonald's razor-sharp prose elevated the detective novel to a new level, and the interviews and illustrations add to this icon's luster.
— Shelf Awareness

Kevin Avery has published over 300 articles and short stories. His books include Everything Is an Afterthought: The Life and Writings of Paul Nelson and Conversations with Clint: Paul Nelson’s Lost Interviews with Clint Eastwood, 1979 – 1983. He lives in Brooklyn, NY.

Paul Nelson is best known as a music critic and executive who championed performers such as Rod Stewart and the New York Dolls. He passed away in 2006.

Ross Macdonald is the pen name of crime fiction author Kenneth Millar. He is best known for his Lew Archer series of novels and was awarded the Grand Masters Award from the Mystery Writers of America. After being raised in Ontario, Canada, he passed away in 1983 after spending the majority of his life in Santa Barbara, California.
Loading...
or support indie stores by buying on