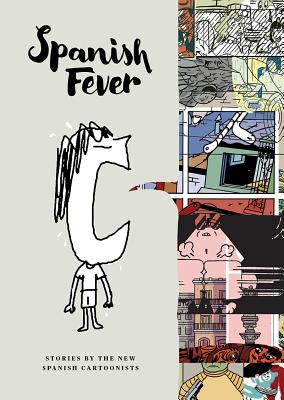 This is an anthology of short comics stories by up-and-coming Spanish cartoonists.

Fantagraphics Books is proud to introduce American readers to more than 30 artists working on the cutting edge of the form. Spanish Fever is an anthology showcasing the best of the new wave of art comics from a country with one of the strongest cartoon traditions in Europe. It includes the work of masters of the form such as Paco Roca, Miguel Gallardo, David Rubín and Miguel Ángel Martín as well as newcomers like José Domingo, Anna Galvan, Álvaro Ortiz and Sergi Puyol.

Eddie Campbell is best known for drawing and publishing From Hell (with writer Alan Moore). His various comic creations include the semi-autobiographical Alec, the Bacchus series, and the graphic novel The Lovely Horrible Stuff. Born in Scotland, he lives in Australia.

Santiago Garcia (Trajano Bermúdez) has degrees in journalism and art history from Complutense University of Madrid and the Autonomous University of Madrid, respectively. He is a writer, editor, critic, and translator. He has translated Spanish Spider-Man, X-Men, and Calvin and Hobbes editions, and he’s edited several anthologies.

Paco Roca (Francisco Martínez Roca) is a graphic artist and a cartoonist from Valencia, Spain, who has won several art/writing awards. His graphic novel Wrinkles has been adapted into an animated movie.

This collection is sure to keep any comics fan up-to-date on one of the most compelling cartooning traditions in Europe.

Anthologies like this are a reminder of how much excellent stuff there’s out there that a lot of us have never come across. I’m so glad to be able to sample a little of such a lively comics scene, and discover so many great creators. Thank you, Fantagraphics!
or
Not Currently Available for Direct Purchase
Copyright © 2020 American Booksellers Association