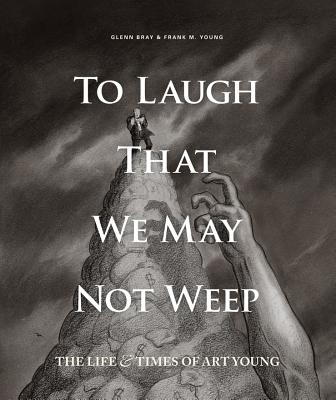 To Laugh That We May Not Weep

The Life And Art Of Art Young

A sweeping career retrospective, reprinting — often for the first time in 60 or 70 years — more than 800 of Young’s incendiary cartoons.

Art Young was one of the most renowned and incendiary political cartoonists in the first half of the 20th century. And far more — an illustrator for magazines such as The Saturday Evening Post and Colliers, a magazine publisher, a New York State Senatorial candidate on the Socialist ticket, and perhaps the only cartoonist to be tried under the Espionage Act for sedition. He made his reputation appearing in The Masses on a regular basis using lyrical, vibrant graphics and a deep appreciation of mankind’s inherent folly to create powerful political cartoons. To Laugh That We May Not Weep is a sweeping career retrospective, reprinting —often for the first time in 60 or 70 years— over 800 of Young’s timeless, charming, and devastating cartoons and illustrations, many reproduced from original artwork, to create a fresh new portrait of this towering figure in the worlds of cartooning and politics. With essays by Art Spiegelman, Justin Green, Art Young biographer Marc Moorash, Anthony Mourek, and Glenn Bray, with a biographical overview of Young’s life and work by Frank M. Young, To Laugh That We May Weep is a long-awaited tribute to one of the great lost cartoonists whose work is as relevant in the 21st century as it was in its own time.


Praise For To Laugh That We May Not Weep: The Life And Art Of Art Young…

Political cartoons usually have the shelf life of yogurt, yet many of Art Young’s drawings from the early twentieth century remain fresh and hilariously witty. A jovial man who even had empathy for his enemies, Young had a winning sense of humor as well as a strong sense of social justice.
— The New Yorker

Published at a time when political rancor overwhelms nearly every other conversation, To Laugh That We May Not Weep is a welcome reminder of how poignant, elegant and, yes, funny a historic political cartoon can be.
— Chicago Tribune

The brilliance and humane qualities of Art Young's work are as real in these pages as they ever were. Reader, dig in.
— The Los Angeles Review of Books

To Laugh That We May Not Weep enshrines, even as it comments on, the work of the preeminent American political cartoonist. Young's beautifully drawn cartoons are still fresh and as powerful as any tabloid front page.
— Bookforum

Art Young was an American political cartoonist and writer who was born in 1866 and died in 1943. He attended the Chicago Academy of Design, the Art Students League of New York, and the Academie Julian. Young is most known for his contributions to the radical socialist magazine The Masses.

Frank Young is the author of the graphic novels Oregon Trail: The Road to Destiny, and The Carter Family: Don’t Forget This Song. The latter won an Eisner award in 2013. He was born in Tallahassee, Florida, and graduated from Florida State University in 1984. Young works as a writer, editor, cartoonist, and designer.  He currently lives in Portland, Oregon.
Loading...
or
Not Currently Available for Direct Purchase