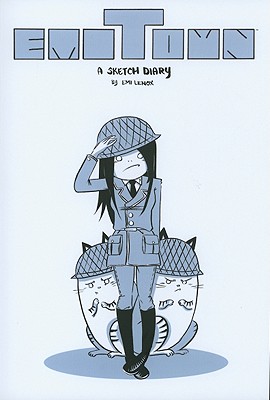 From the whimsical to the tragic, EMI LENOX brings you into her world with superb cartooning, a brilliant cast of characters, and an innocent perspective often left on the cutting room floor of other diary comics. With a broad range of styles, everyday is an adventure from the morning breakfast burrito to metaphoric tales of superheroes and battlefields of love. Emi proves that life is never dull in her first annual collection of EmiTown Based out of her hometown, Portland, Oregon, Emi has spent the last year doodling everyday in her diary sketchbook and taking on internships within the comics community. Having been raised on manga (via her Japanese mother) she has dreamed about becoming a cartoonist at a young age. In her early twenties the works of Jeff Smith, Adrian Tomine, and Craig Thompson entered her life and super inspiration struck This is Emi's first published work. Introduction by JAMIE S. RICH. "EmiTown is the rare and charming comic that doesn't resort to nudity and misanthropy for it's entertainment. It's just adorable" - David Hahn (Bite Club, Fables) "Emi can draw like nobody's business. Her style is fabulous " - Jamie S. Rich (You Have Killed Me, Spell Checkers) "Some of the nicest cartooning I've discovered in a long time" - Jeff Lemire (Sweet Tooth, Essex County) "Emi Lenox misrepresented herself to me as someone who doesn't draw, when in fact she does. Really well too. Good narcissism " - Jeff Parker (Underground, Agents of Atlas, X-Men: First Class)
or
Not Currently Available for Direct Purchase
Copyright © 2020 American Booksellers Association