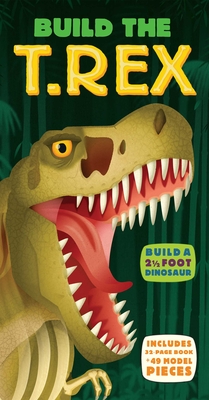 Build the T. Rex (Build It)

Don’t let your brain become a fossil! Reading about dinosaurs is cool, but building one yourself is “dino-mite!”

Keep your brain from becoming petrified with this exciting new kit. Build the T. Rex will take you back into the Mesozoic era to discover the mysterious age of the dinosaurs. Have fun while learning, and see the T. rex like never before, with colorful illustrations, fascinating facts about dinosaurs, and by building your very own T. rex skeleton.

Darren Naish (born 1975) is a British vertebrate palaeontologist, science writer and technical editor with an M. Phil. and Ph.D. from the University of Southampton, UK. He works mostly on Cretaceous dinosaurs and pterosaurs, but has an avid interest in all things tetrapod: he has been blogging at Tetrapod Zoology since 2006. His doctoral work on was on the basal tyrannosuaroid theropod Eotyrannus, a dinosaur that, together with colleagues, he named in 2001.

Darren’s research is widely reported in the news media and he has appeared on British television. He has published extensively in academic publications and written several children’s titles as well as popular books including the highly acclaimed BBC Walking with Dinosaurs: The Evidence (2000, with David Martill), produced to accompany the TV series. In 2010, he published The Great Dinosaur Discoveries as sole author.

Mark Ruffle was born near Bristol in 1973. He graduated from the University of the West of England with a degree in graphic design in 1995. After leaving college, Mark worked as a visualizer, and then in 1997 started working for Oxford University Press as an art buyer. Mark has been freelancing since 2000 and has enjoyed working for a wide variety of clients including Aardman, producing illustrations for Flash. He has designed and illustrated web content for the BBC to accompany television programs such as Hustle, Holby City, and Bleak House. Mark works in Adobe Illustrator and is equally happy drawing illustrations for books, packaging, advertising, or animation.

Galia Bernstein was born and raised in Israel. She started as a designer and illustrator in the Israeli's army magazine when she was 18 years old. After her service ended, she worked as a designer and art director in children's magazines and started illustrating books and writing comic strips for kids. She moved to New York to study illustration at the Parsons School of Design, and today she lives in Brooklyn. She is represented by NB Illustration in London, UK ,and works with clients all over the world, including Candlewick Press, Franklin Watts, Ladybird Books, Sterling Publishing, Pearson, Oxford University Press, Scholastic, and Macmillan.
or support indie stores by buying on