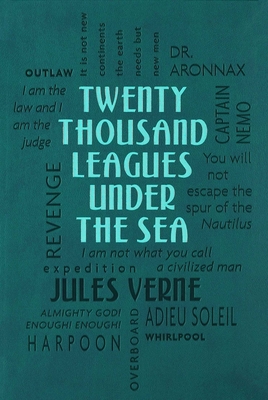 No home library is complete without the classics! Twenty Thousand Leagues Under the Sea is a keepsake to be read and treasured.

Twenty Thousand Leagues Under the Sea tells the classic story of Captain Nemo and his submarine Nautilus as seen from the point of view of Professor Pierre Aronnax, who was commissioned to find the mysterious sea monster responsible for sinking ships. Written by French science fiction writer Jules Verne in 1870, the novel illuminates themes that transcend time, such as man versus nature, freedom, and revenge. Now available as part of the Word Cloud Classics series, Twenty Thousand Leagues Under the Sea is a must-have addition to the libraries of all classic literature lovers.

French writer Jules Verne (February 8, 1828 - March 24, 1905) pioneered the science fiction literary genre. He published many plays, essays, short stories, and poems during his lifetime, but is best known for Twenty Thousand Leagues Under the Sea, Around the World in 80 Days, and A Journey to the Center of the Earth. Today, he is one of the most translated authors in the world.
Loading...
or support indie stores by buying on